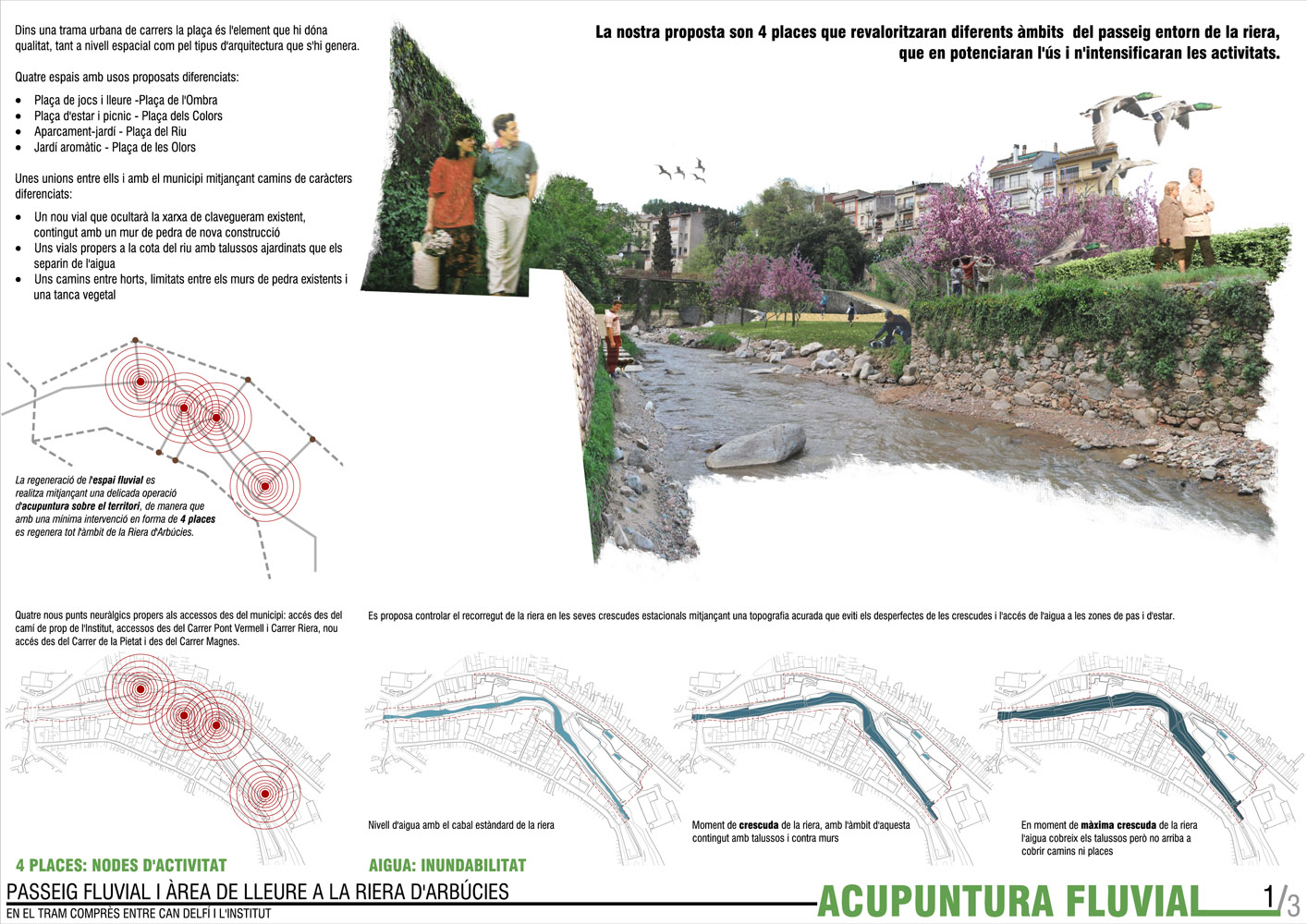 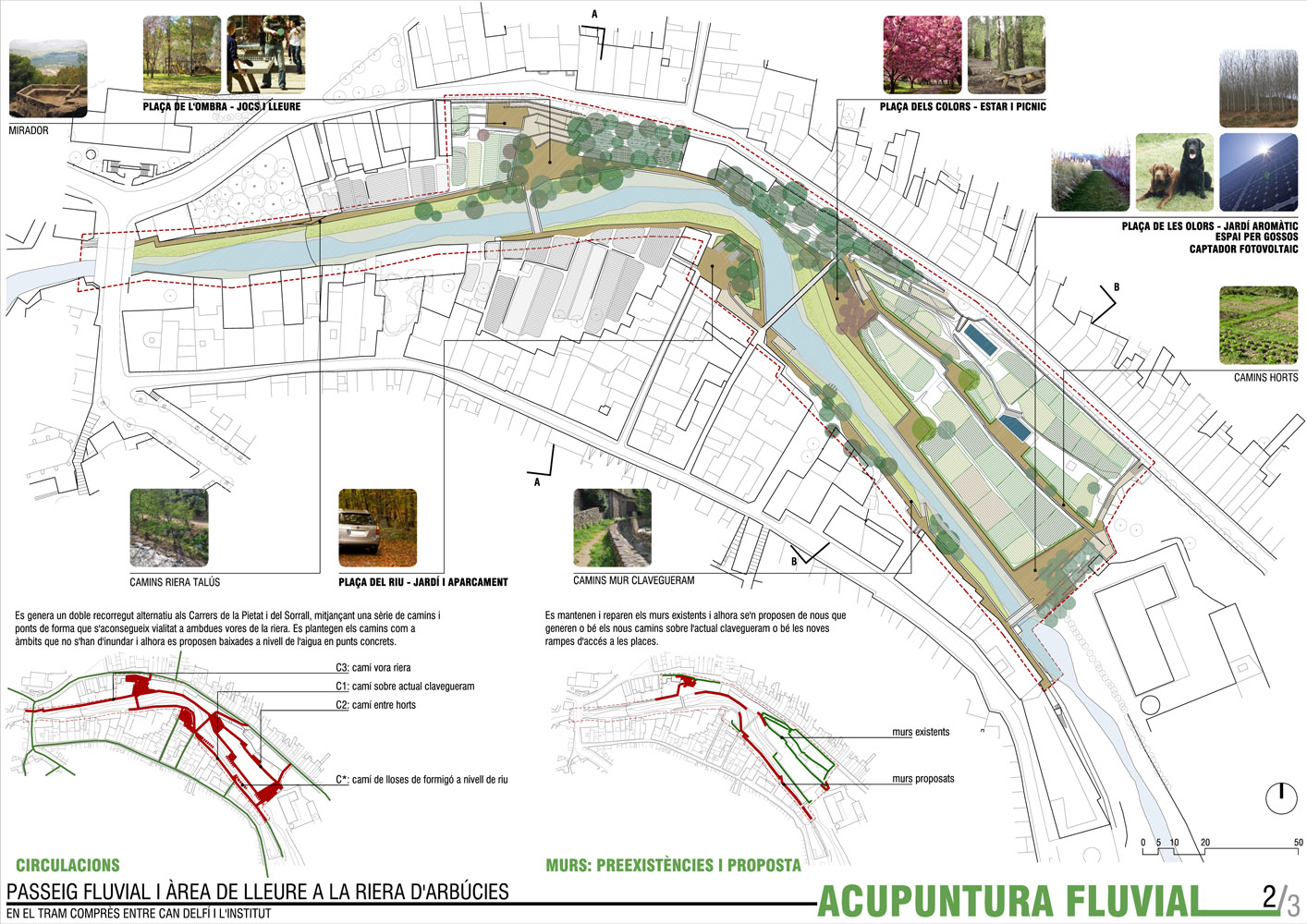 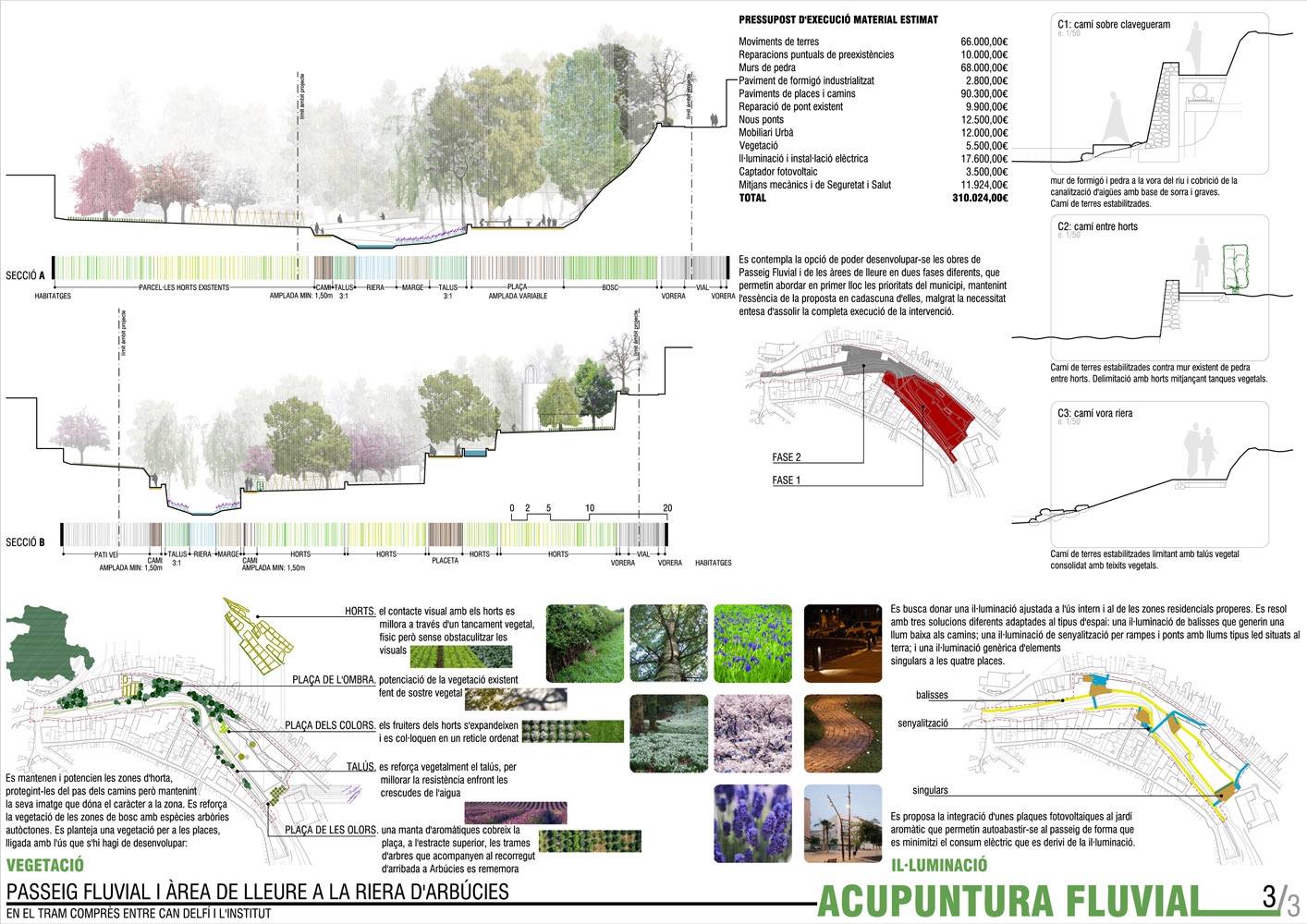 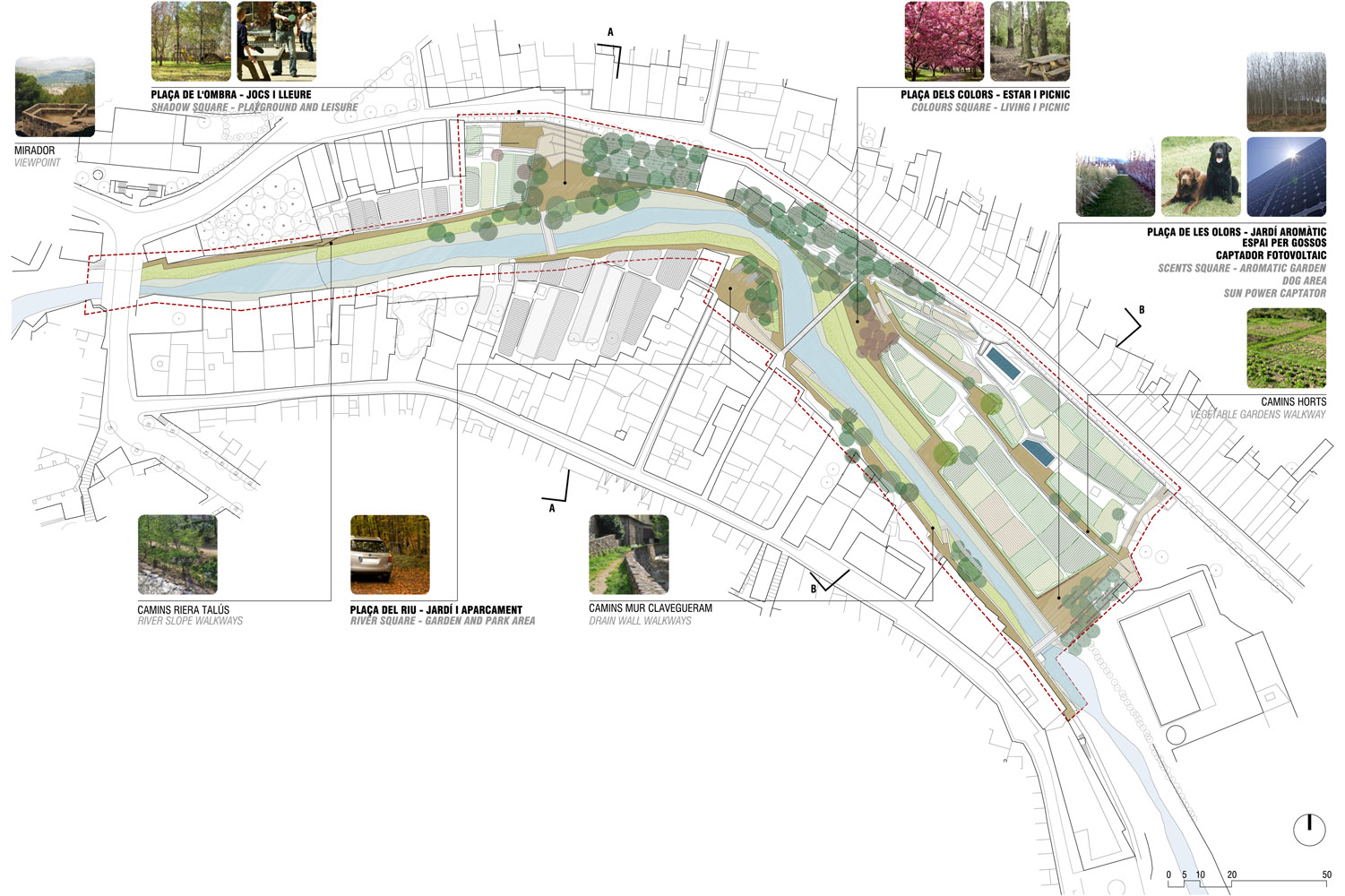 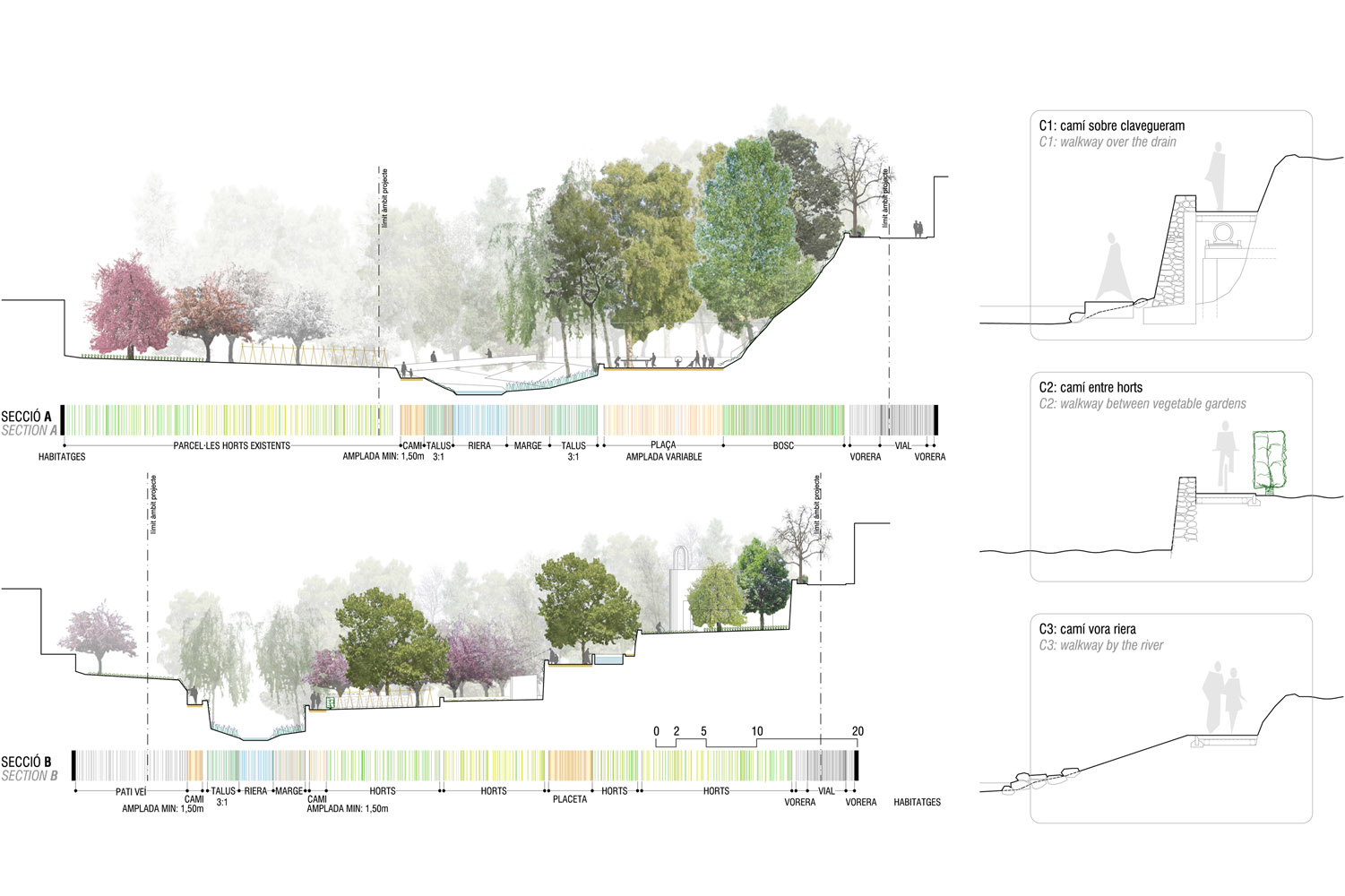 Arbúcies (Girona), 2011
Fluvial Promenade and Leisure Area of Arbúcies Stream
In collaboration with Josep Ortín Meseguer
econd prize at the Ideas Contest of the City Council of Arbúcies

The paradigmatic environment of Riera d’Arbúcies determines the conception of the intervention to make it accessible from the city center. The proposed intervention is conceived from the introduction of the concept “square” to this place, considering it as a point of spatial quality within an urban grid, and incorporating it as part of the city.

The regeneration of the fluvial space is carried out through a delicate acupuncture operation on the territory, so that with a minimum intervention in the form of 4 squares the entire area of Arbúcies Stream is regenerated.

The proposal of four places that will revalue different areas of the walk around the stream, which will enhance their use and intensify their activities, is conditioned by the reading of the natural space and its caracteristic elements. Four new neural points near the accesses from the municipality: access from the road near the Institute, access from Carrer del Pont Vermell and Carrer Riera, new access from Carrer de la Pietat and from Carrer Magnes. Four spaces with different proposed uses: play and leisure place, seating and picnic area, garden-car park and aromatic garden. The unions between them and the municipality are made through paths of different characters: a new road that will hide the existing sewerage network, contained with a newly constructed stone wall, roads next to the level of the river with landscaped slopes that separate them and a path between orchards, limited between the existing stone walls and a vegetal fence.