Europan 15: BEGINNING AT THE END 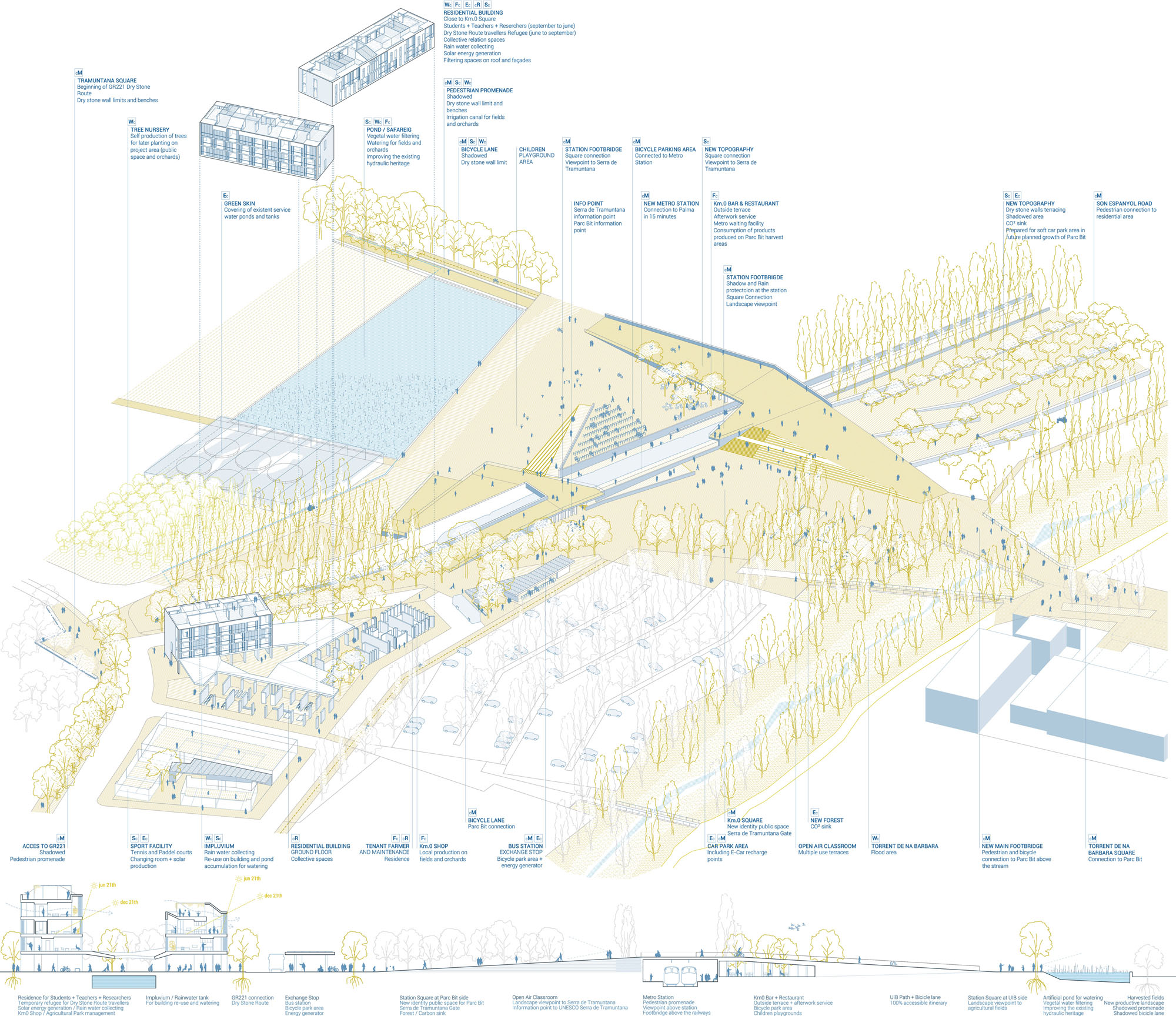 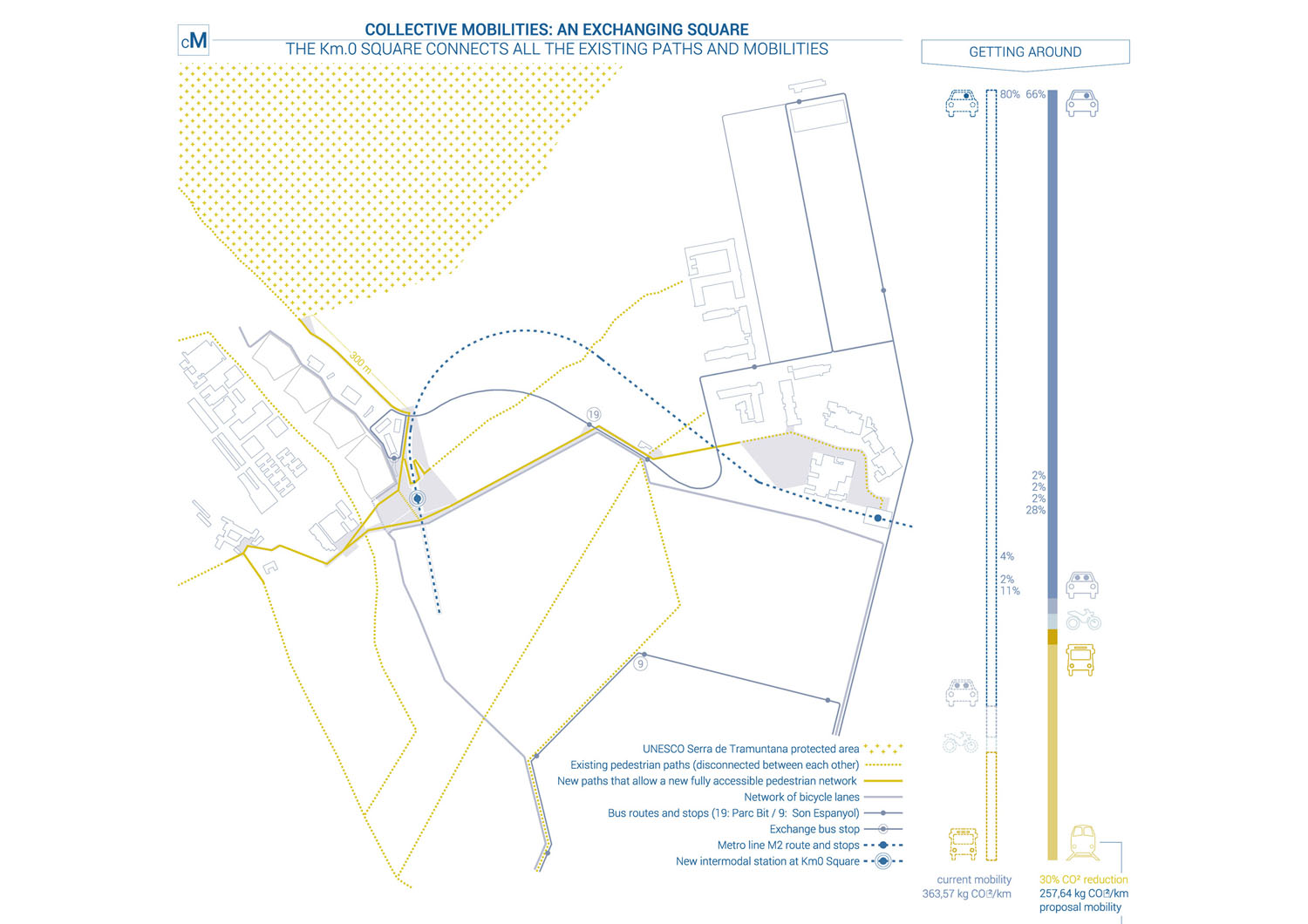 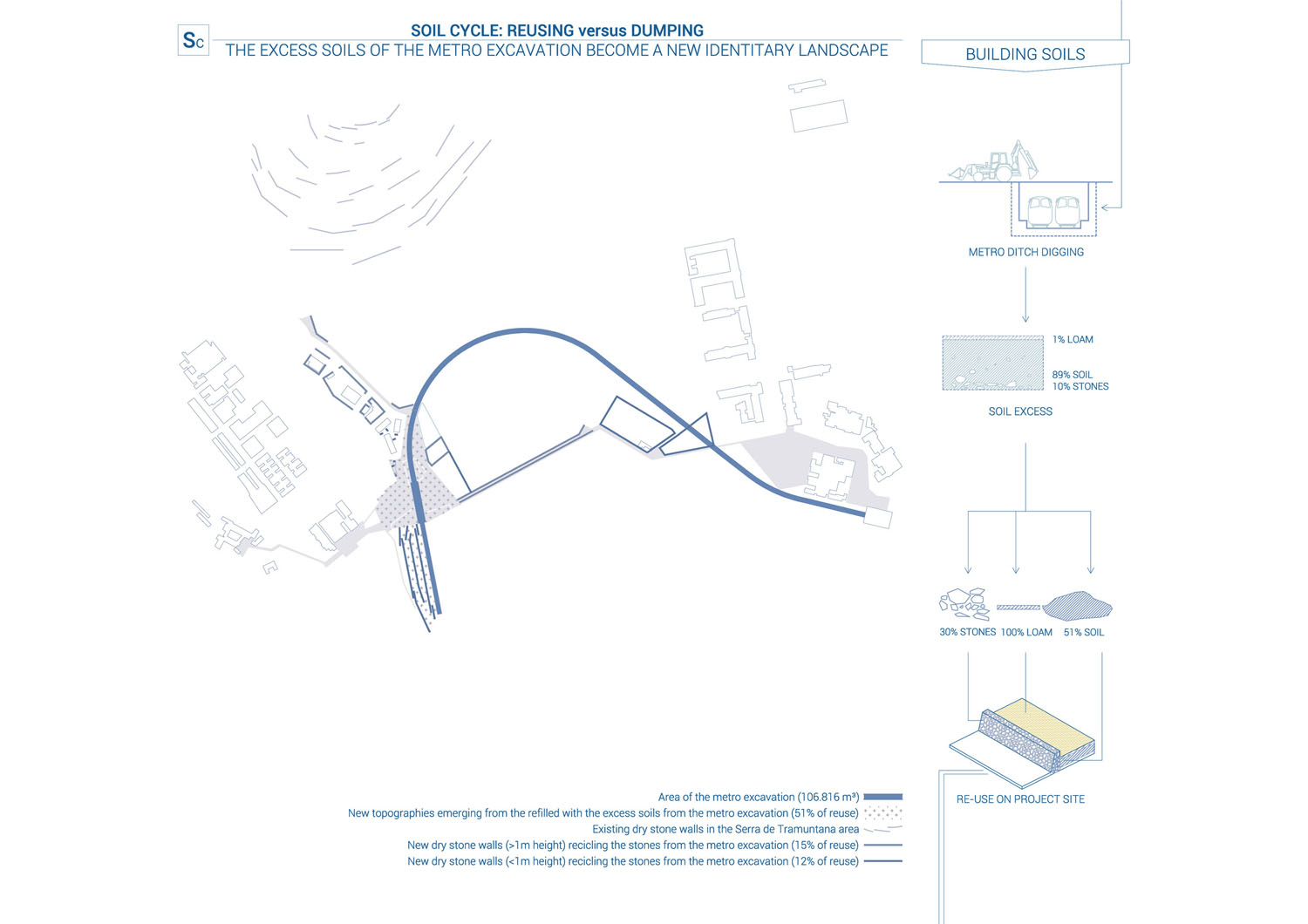 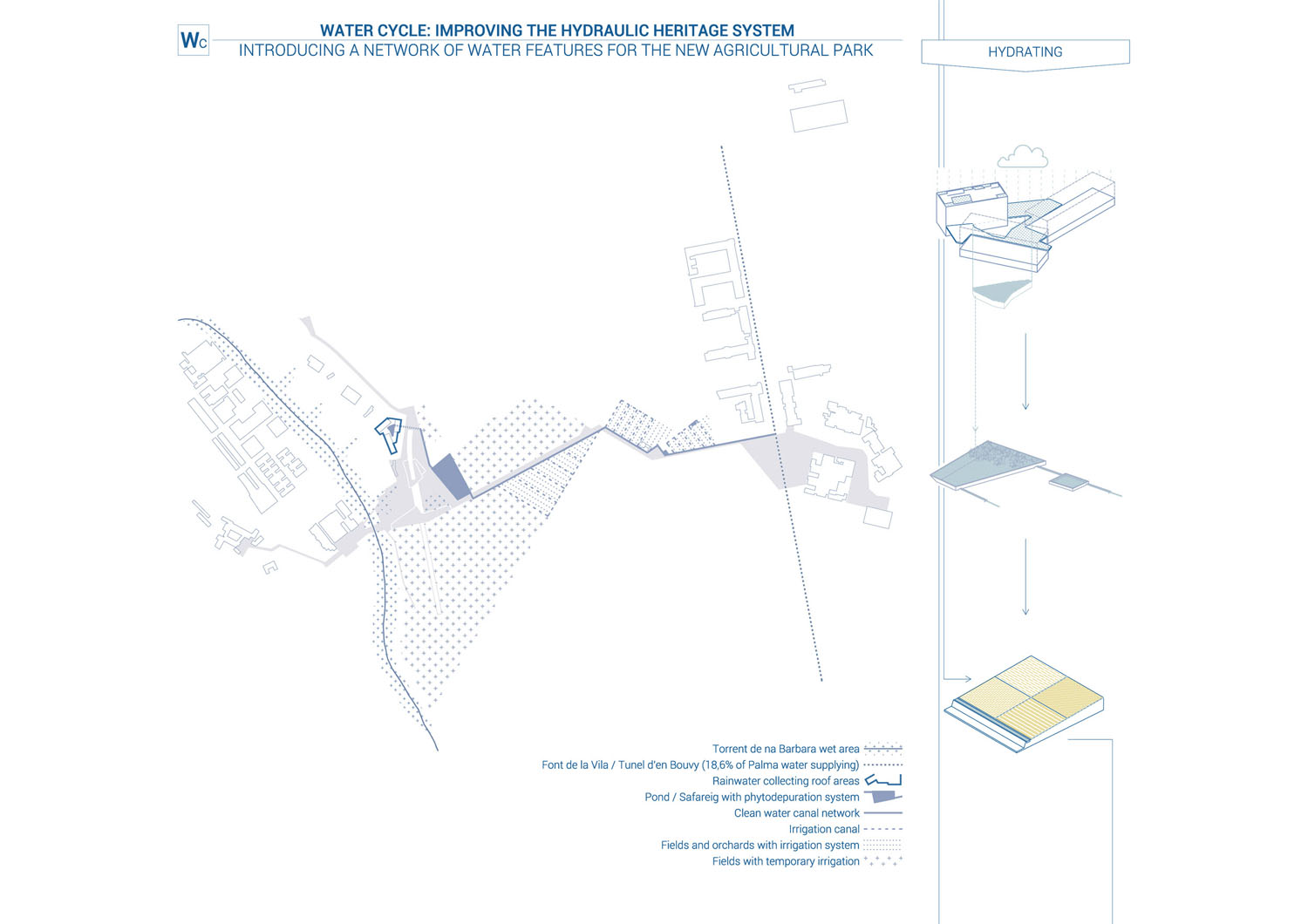 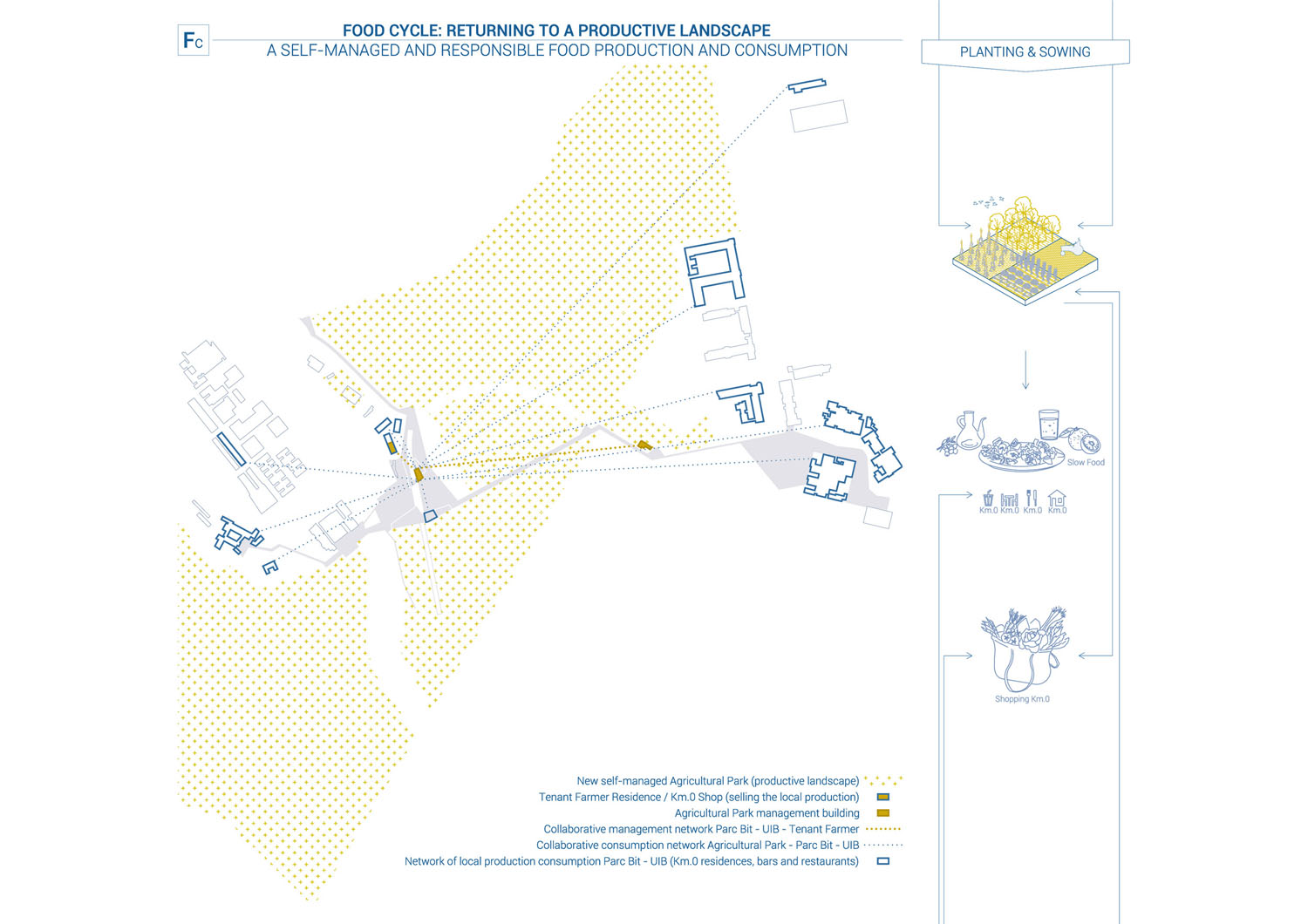 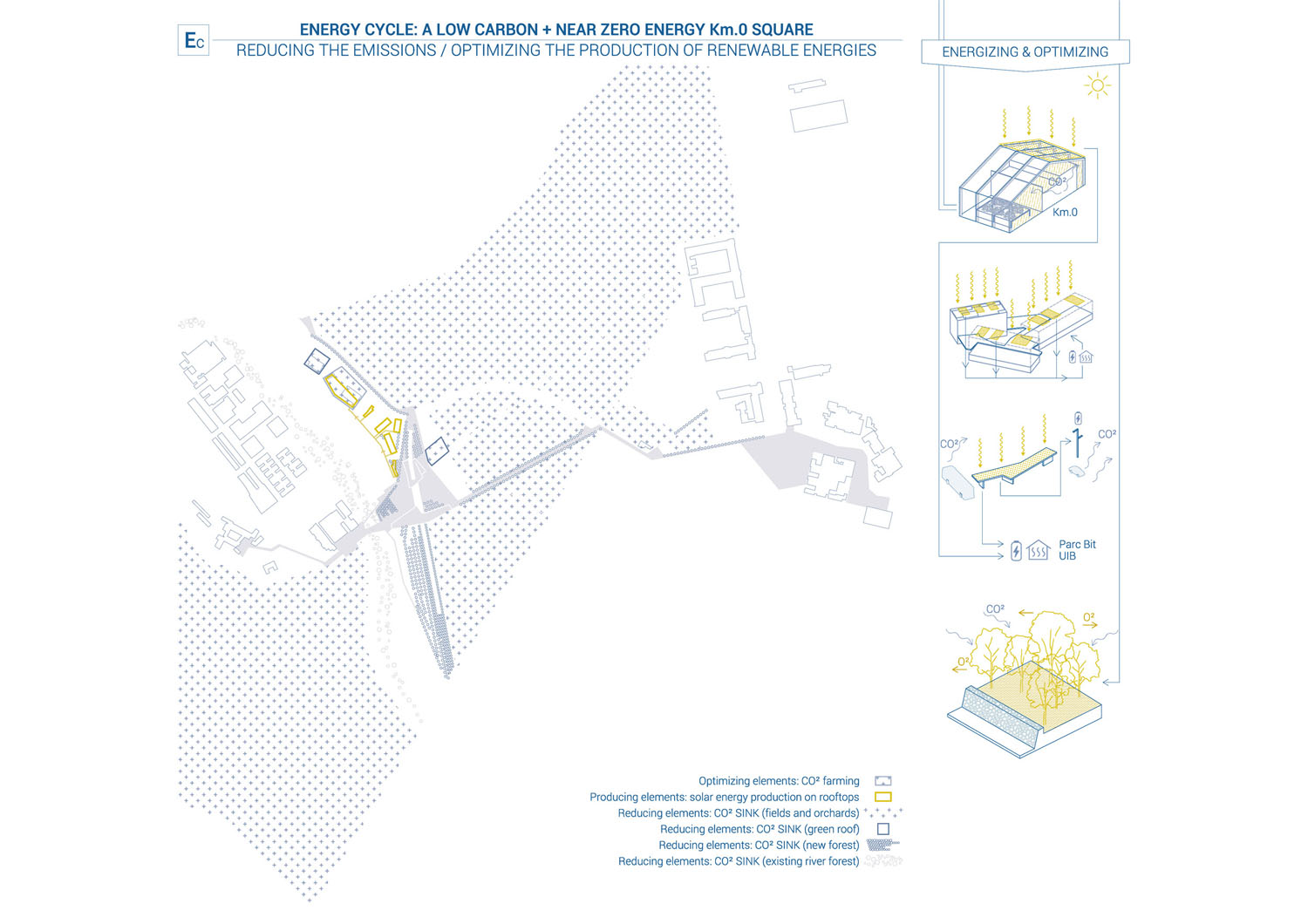 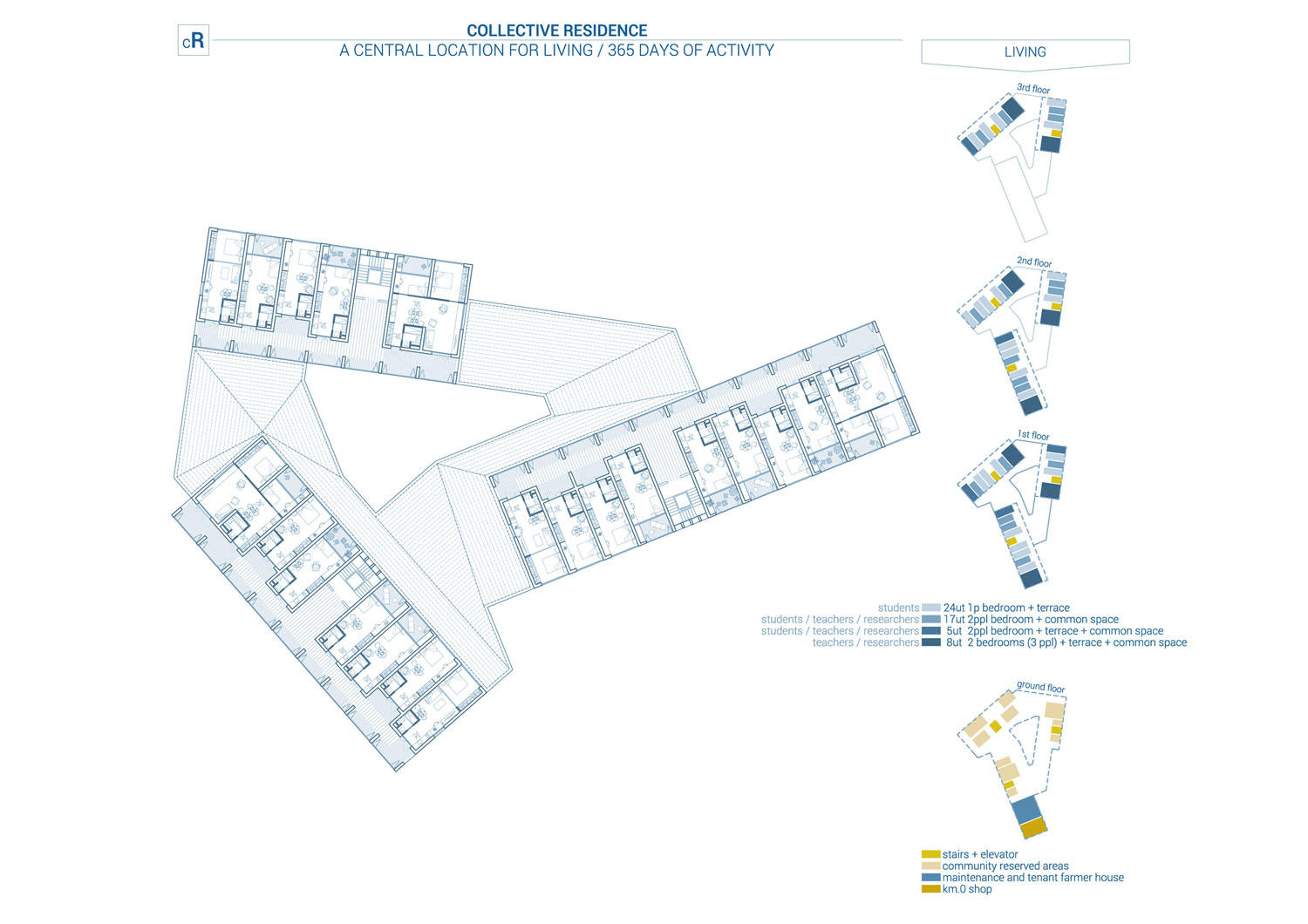 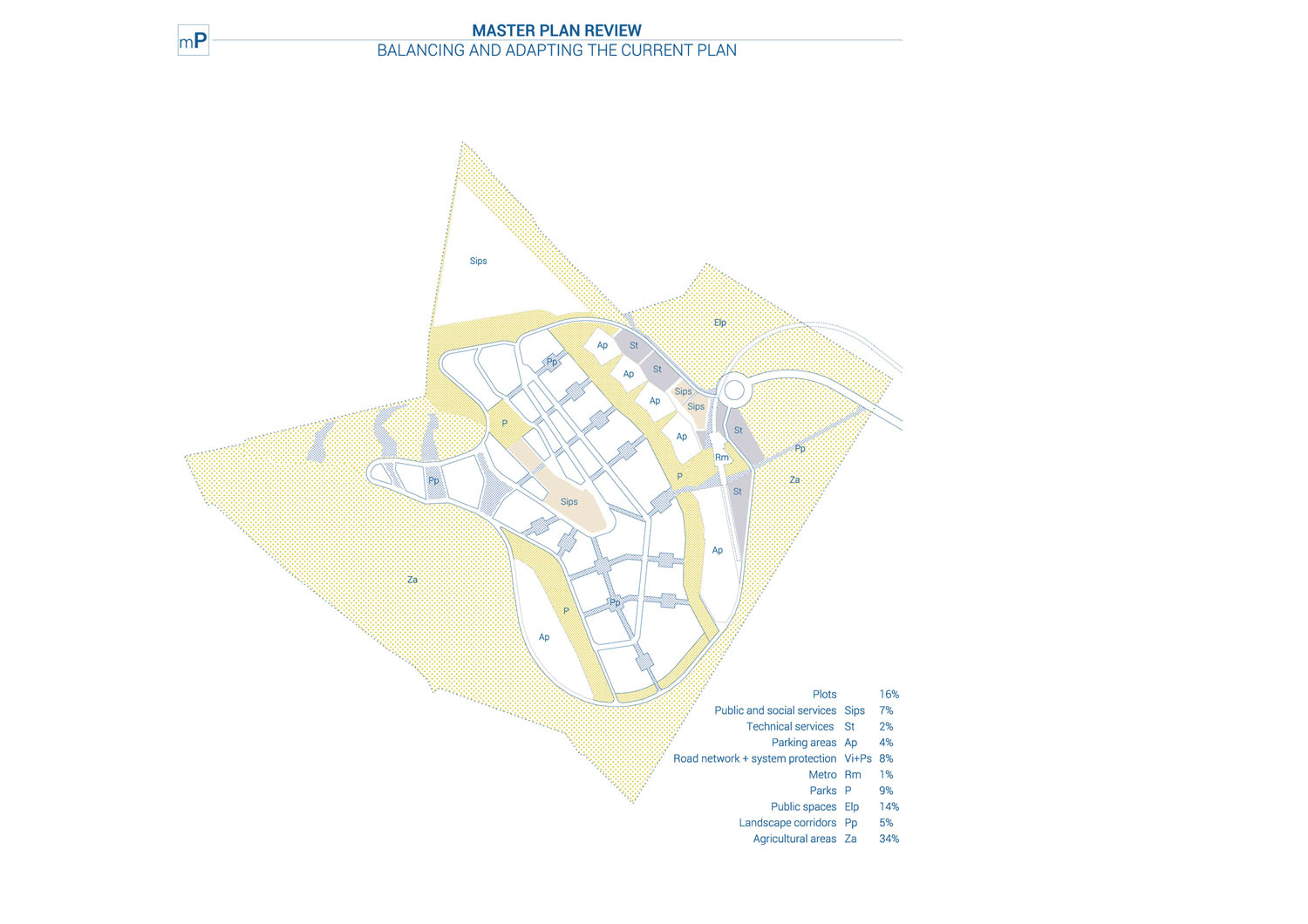 A TERRITORIAL OPORTUNITY: THE SERRA DE TRAMUNTANA GATE
The new metro station in the Parc BIT is determined by its location, the projected type of section and its construction process. It is evident the need to create a new centrality space, linked to the station and articulated with the rest of the territory connections, while resolving the scar that the arrival of the metro will generate in the landscape.

The relationship of proximity, collaboration and connection with the UIB (University of the Balearic Islands), together with the proximity to the UNESCO World Heritage Site of Serra de Tramuntana Cultural Landscape (300m) and the new mobility that will bring the place closer to the center of Palma, will make the new station become a territorial gate with a clear vocation to become the unique gate to the Serra de Tramuntana with metro access.

The station is considered as a large square space, a new centrality that must be at the same time the generator of a new identity, with uses linked to the current economic activity of the Parc BIT. The location in a privileged rural environment allows the open spaces to be recovered as a productive agricultural landscape, thus recovering the identity image of the site.

The proposal to turn the end of the line station into the gate of the Serra de Tramuntana will increase the potential number of users of the metro, since now it will not only be projected for the workers of the Parc Bit (currently 3.000 workers) but also will open up to hiking tourists in Mallorca (in ten years the number of overnight stays in the Serra de Tramuntana refuges has multiplied by 6).

The investment of the extension of the metro line is planned at € 11.600.000, financed 50% with ERDF funds. The proposal of our Km.0 SQUARE in the Parc Bit but also linked now with the Serra de Tramuntana area will allow this investment to be amortized faster while direct beneficiaries will increase.

Km.0 SQUARE: THE NEW REVITALIZED, INTERCONNECTED, LOW CARBON AND SIGNIFICANT PUBLIC SPACE OF PARC BIT
The square allows to overcome the scar caused by the railway excavation becoming a great staying, meeting and significant space for the Parc Bit. Two new topographies allow to cross the tracks and articulate the arrivals of several paths that will join in the center of the square. A new shadowed, tree-lined walk connects pedestrianly and by bike the Parc BIT with the UIB offering the shortest route and separated from the car road.

The square spaces will be equipped with different services: on the Parc BIT side, the square will have a space of stands intended to be an open-air classroom, an information point of the Serra de Tramuntana, rest areas linked to a new carbon sink forest, and also bicycle parking areas and bus stop. On the other side there will also be a large bicycle parking lot, a Km.0 bar-restaurant with outdoor terrace, playground for children and the maintenance center for agricultural areas. From both sides of the square there will be accesses to the platforms of the metro station. The elevated footbridges for pedestrians and bicycles (which communicate the two sides of the square and offer landscape viewpoints) will offer porch spaces on the platforms, in order to have areas of shade and sheltered from the rain.

Our proposal aims to improve relationships with the site as well as to be environmentally friendly, developed through five metabolic strategies:

1.COLLECTIVE MOBILITIES: an exchanging square that connects all the existing paths and mobilities
2.SOIL CYCLE: REUSING versus DUMPING. The excess soils of the metro excavation become a new identitary landscape
3.WATER CYCLE: IMPROVING THE HYDRAULIC HERITAGE SYSTEM. Introducing a network of water features for the new agricultural parc
4.FOOD CYCLE: RETURNING TO A PRODUCTIVE LANDSCAPE. A self-managed and responsible food production and consumption
5.ENERGY CYCLE: A LOW CARBON + NEAR ZERO ENERGY Km.0 SQUARE. Reducing the emissions / optimizing the production of renewable energies

1. COLLECTIVE MOBILITIES: AN EXCHANGING SQUARE
Mobility is a key issue in understanding the scope of the proposal, taking into account both soft mobility (pedestrian, bicycle), collective mobility (subway, bus) and private mobility.

The center of the new square will be the metro station as well as the point of confluence of all existing roads (Germans Luimiere street, Son Espanyol path, old path to the UIB) and the new ones (extension of the Dry Stone Route GR221 , tree-lined avenue towards the UIB). It will also include the bus stop (moving the existing one and badly located to allow a fast and fluid relationship between both means of transport) and two bicycle parking areas, as a service for internal mobility in the BIT Park and also as a point of departure of bicycle routes. Direct bicycle paths will depart from the Square to the UIB, to the center of Parc BIT (central services of Son Espanyol) and to the Serra.

The relationship space and the location of the bus stops at the central section of the road that connects the BIT Park and the UIB are improved, and small squares linked to pedestrian and bike circulation are generated.

2. SOIL CYCLE: REUSING versus DUMPING
The process of construction of the new section of the Metro line represents an important soil movement, in which it is estimated that there is a surplus of more than 100,000 m3. This volume will be formed by both soil and stones. This excess of material is an opportunity to generate the topographies necessary to allow the integration of the station and the open space of roads with the territory. Reusing the soil in the same place will not only reduce the economic costs of landfill but also reduce the pollution related to its transportation. Loam will be used in plantation areas. Stones will be reused to build dry stone walls that will accompany several paths and will generate terraces around the tracks. Soil will be used to generate topographies to elevate the footbridges that will communicate the square on both sides of the station above the metro tracks, and at the same time to generate terraces around the metro and to define the geometry of the new connection paths.

3. WATER CYCLE: IMPROVING THE HYDRAULIC HERITAGE SYSTEM
The project also incorporates the use and reuse of water, a scarce asset in Mallorca. The roofs of the new buildings, mainly those of the residential one, where a huge central impluvium is generated, will become receivers and conductors of water into storage tanks, from where it will be driven to a large pond where, after a phytodepuration system, will be distributed through a system of irrigation canals, to the Park BIT orchards and fields, taking advantage of and improving the knowledge of the hydraulic tradition on the Island.

4. FOOD CYCLE: RETURNING TO A PRODUCTIVE LANDSCAPE
Given the obvious availability of agricultural land suitable for production, and with the provision of a water catchment system, the need to have a person or a family dedicated to the management and farming, in order to get a yield, is evident. The production obtained will be mainly destined for the food supply of Parc BIT, either in bars and restaurants, in the residence or in office buildings, and also at the UIB. Production and consumption in the same place, food and economy Km.0. There will also be a point of sale of the surplus of products, either for the regular users of the facilities as for occasional ones. The location of the farmer residence and the point of sale of the products cultivated in the Parc BIT is considered to be on the ground floor of the residential building, at the closest point to the Km.0 Square and to the Metro and Bus stations.

5. ENERGY CYCLE: A LOW CARBON + NEAR ZERO ENERGY Km.0 SQUARE
The current Technical Services buildings define the north-eastern façade with which the BIT Park is related to the Rural Landscape and the Serra de Tramuntana, as well as is the place where arrival with all means of. The need to improve their formal relationship with the environment is brought up at an ecological and energy level through a new covering. In the case of the maintenance building, a green skin will help to compensate for the levels of CO2 emissions at the area. In the case of the trigeneration plant, a roof with thermal and photovoltaic panels will contribute to the reduction of generation and self-sufficiency; and at the same time, the reuse of its CO2 emissions is proposed using the covering as a greenhouse where vegetables will be cultivated using carbonic fertilization.

COLLECTIVE RESIDENCE
The residential building is located close to the station, in the Parc BIT “facade”(leaving the public-owned plots free). The living space linked to Km.0 Square will give it constant activity. At its side, and completing this pre-access to the parking bags band, a find sports equipment will be placed, with individual sport courts as tennis or paddle, to encourage physical activity and provide recreational use to the whole.

The building is break up in three volumes to generate a low visual impact on the landscape, with a more domestic scale. These three volumes are connected by porches that collectivise the open floor ground with shared uses (access, bicycle parking, small open air theater, study room, collective kitchen, collective laundry, ping- pong…).

The collective residence arises from the need to solve different needs for the use of living units and the temporary use thereof. The different typologies respond to different realities of users, whether they are Parc BIT Park workers with their family, researchers from the UIB or the Parc BIT who make a temporary stay, either alone or with a partner, or family, teachers or students from the UIB, which will make individual use of the typology. And this is also considered with seasonality usage, as most of these users will only be in the residence from September to June. That is why the typology would also be adapted to a use, from June to September, for travellers of the Dry Stone Route in the Serra de Tramuntana, which can use this residence as a refuge and establish here an origin point, near the Serra and only 15 minutes away from Palma.

The closed private spaces of each type have been optimized and introduced common spaces for the relationship between the users on each floor of the building. The roof is also a community space where you can enjoy the views of the landscape and where to interact with the residents, for that reason it is equipped with spaces of shade and stay. The energy performance of the collective residence incorporates passive climate control strategies such as cross-ventilation, filter spaces on facades and roofs and sunroofs, which are so necessary in Mallorca. Its construction is proposed using cargo walls, to avoid the need for reinforced concrete using traditional construction systems of the site. Photovoltaic solar energy production systems for self consumption are also incorporated.

MASTER PLAN REVIEW
The intervention arised from the location of the new station and the new linked public space is integrated into the existing Parc BIT planning, adapting the areas destined for equipment and services, and also adjusting some streets taking into account historical and existing traces which were not taken into account, in order to obtain a more integrated planning in the territory.