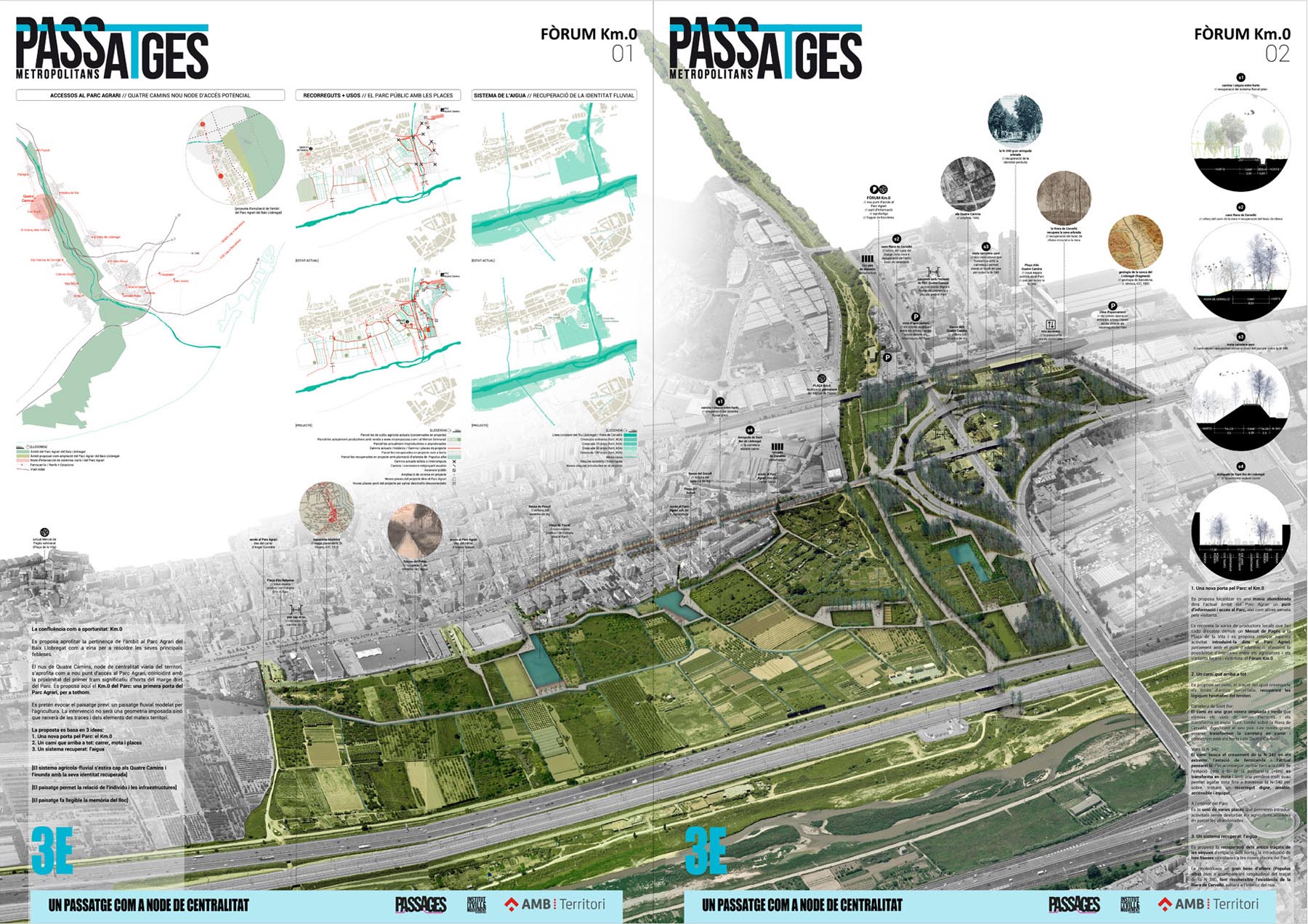 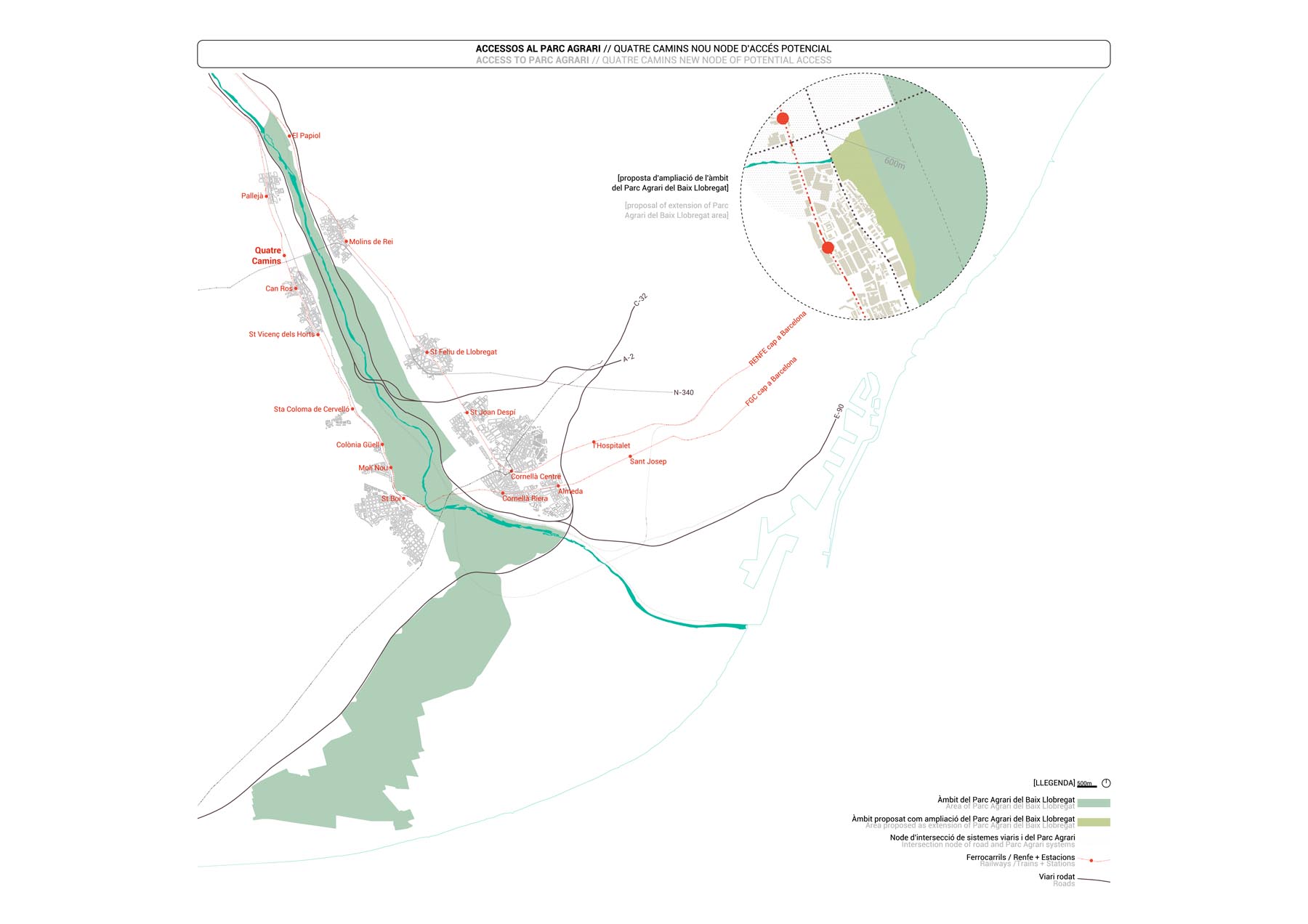 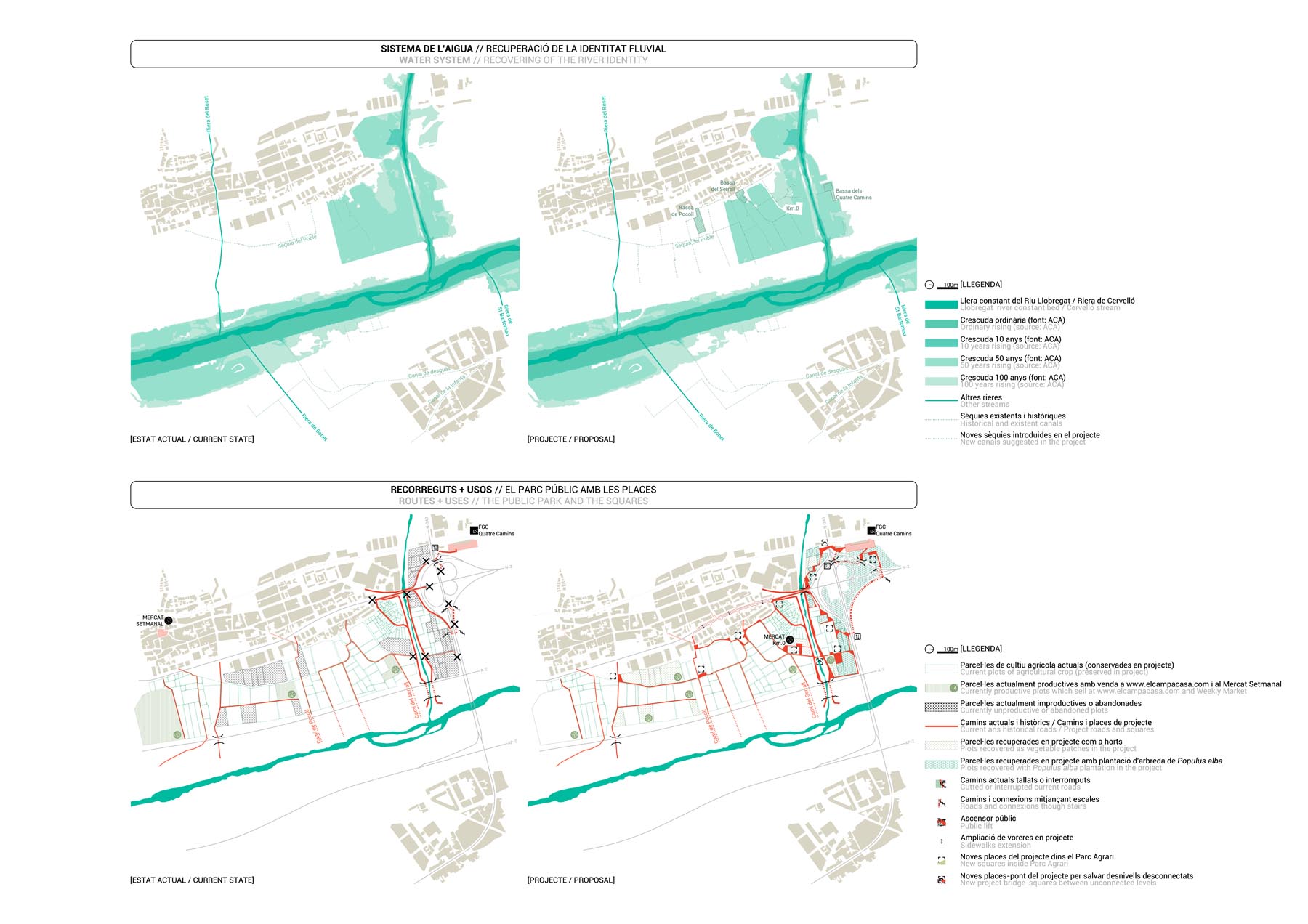 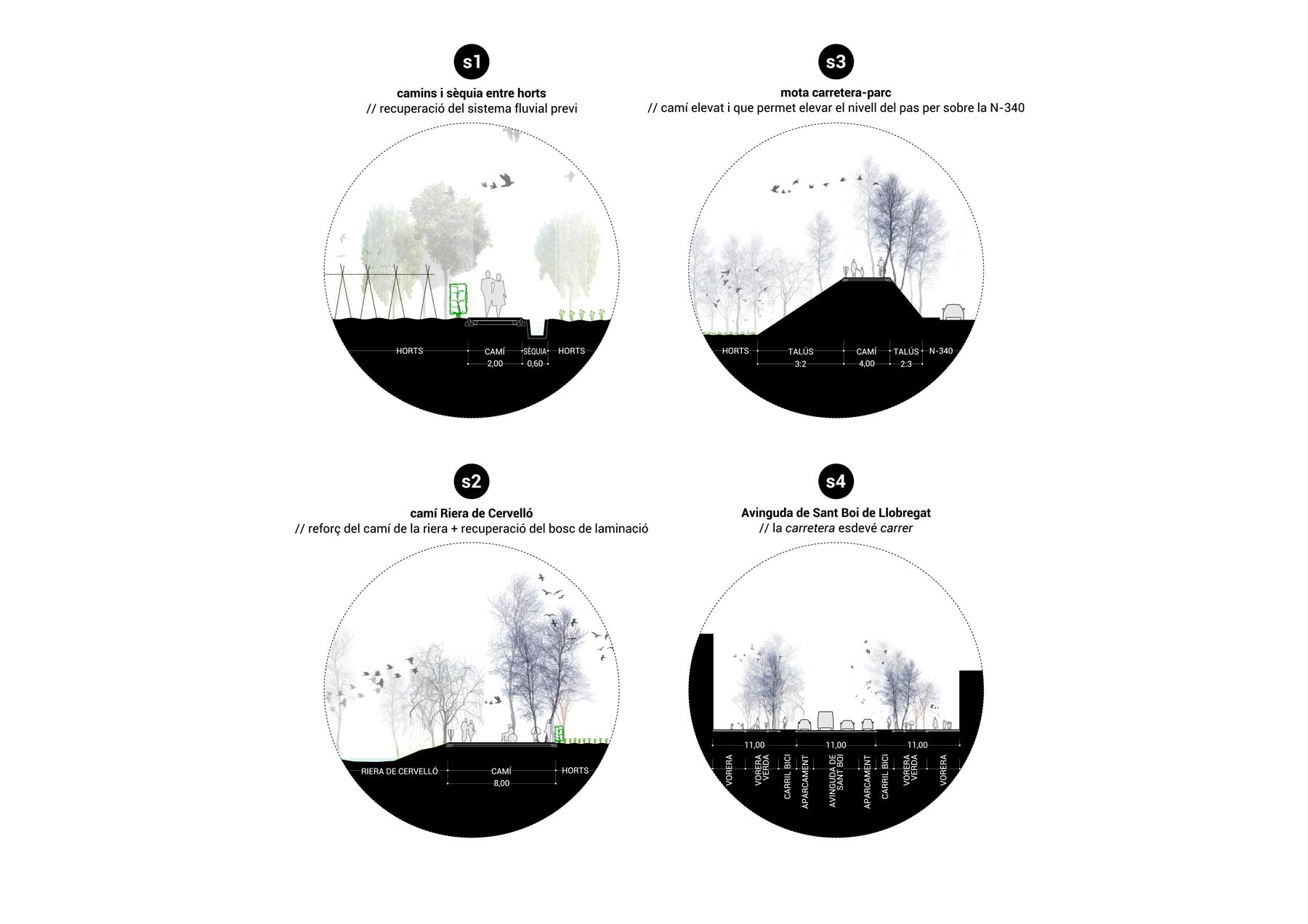 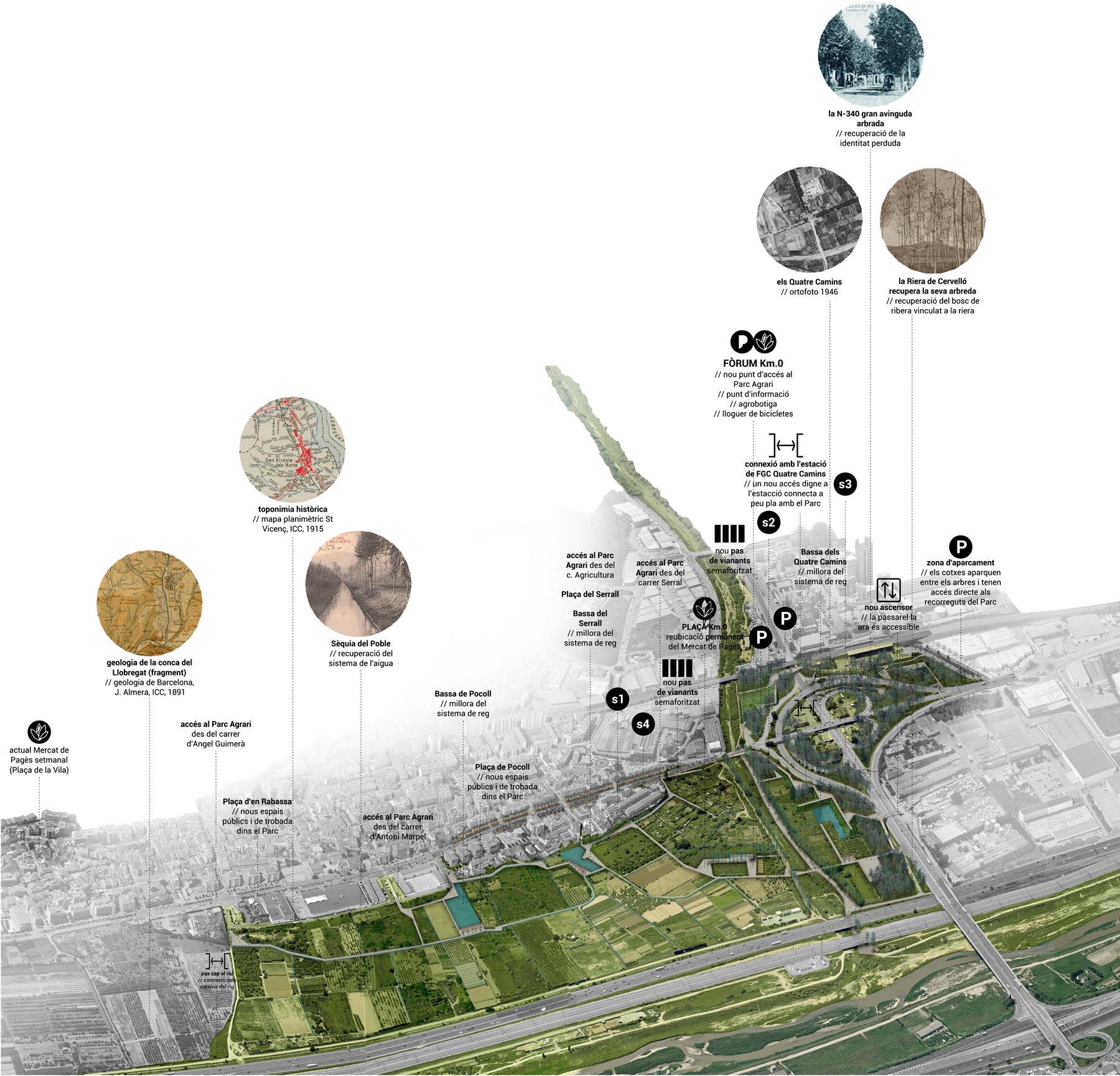 The intersection of Quatre Camins is a strategic point of the territory. In a radius of only 600m, the territorial road system, the urban area of Sant Vicenç dels Horts and the ecological system of the Llobregat River converge, and offer a place of potential interchange between them. The management of the road system at the knot was carried out autonomously whith the resyult of creating cuts, barriers and residual spaces.

It is proposed to take advantage of this confluence between the urban, road and ecological system as a point of territorial encounter, coinciding with the proximity of the first section of vegetable gardens of the right bank of the Baix Llobregat Agricultural Park. It is intended to evoke the previous fluvial landscape modeled by agriculture, so the intervention will not impose a geometry but will start from the traces of the same territory. The improvement of the accesses to the Park is considered related to Sant Vicenç dels Horts by the creation of a new door through the Park (the so-called Km.0) and various urban access points.

The new Km.0 of the Agrarian Park is a new access door from the right bank that connects new routes to the delta and takes place in an abandoned farmhouse in the current area of the Park, an information and exchange point Between farmers and visitors where the Weekly Market of the Plaza de la Vila is relocated: the Forum Km.0.

A new path is proposed (which directly communicates the town, the Agrarian Park and the station) that follows the traces of former plots and retrieves the territory own logics. It starts on the Sant Boi highway, in the urban area of Sant Vicenç, as a large, green sidewalk that eliminates existing service roads and transforms them into free space, transforming the road into a street, improving the bridge over La Riera de Cervelló and connecting with orchards. The contact with the urban grid is manifested through several places, some with new parking areas, which ramify towards the paths of La Riera de Cervelló and look for the crossing of the N-340 for the railway station (with the new bridge-place) and the current gateway, modifying the current crossings to make them friendly and accessible. Already inside the Park, the path gives an open public space between orchards, it is the union of different places that allow the introduction of activities without disturbing the farmers. These are always located in plots currently abandoned.

The improvement of the hydrological system of the territory is also proposed, recovering the old plots of garden irrigation canals and, using the abandoned plots, introducing three ponds linked to the new squares of the Park. The retention forest, characteristic of rivers and streams, aims to promote, above all, an ecosystem that is recognizable from a larger scale and reintroduced as a longitudinal accompaniment of the N-340 outline.

The landscape of the Agrarian Park becomes legible from the city and goes from being delimited by the infrastructures to being opened to the territory.