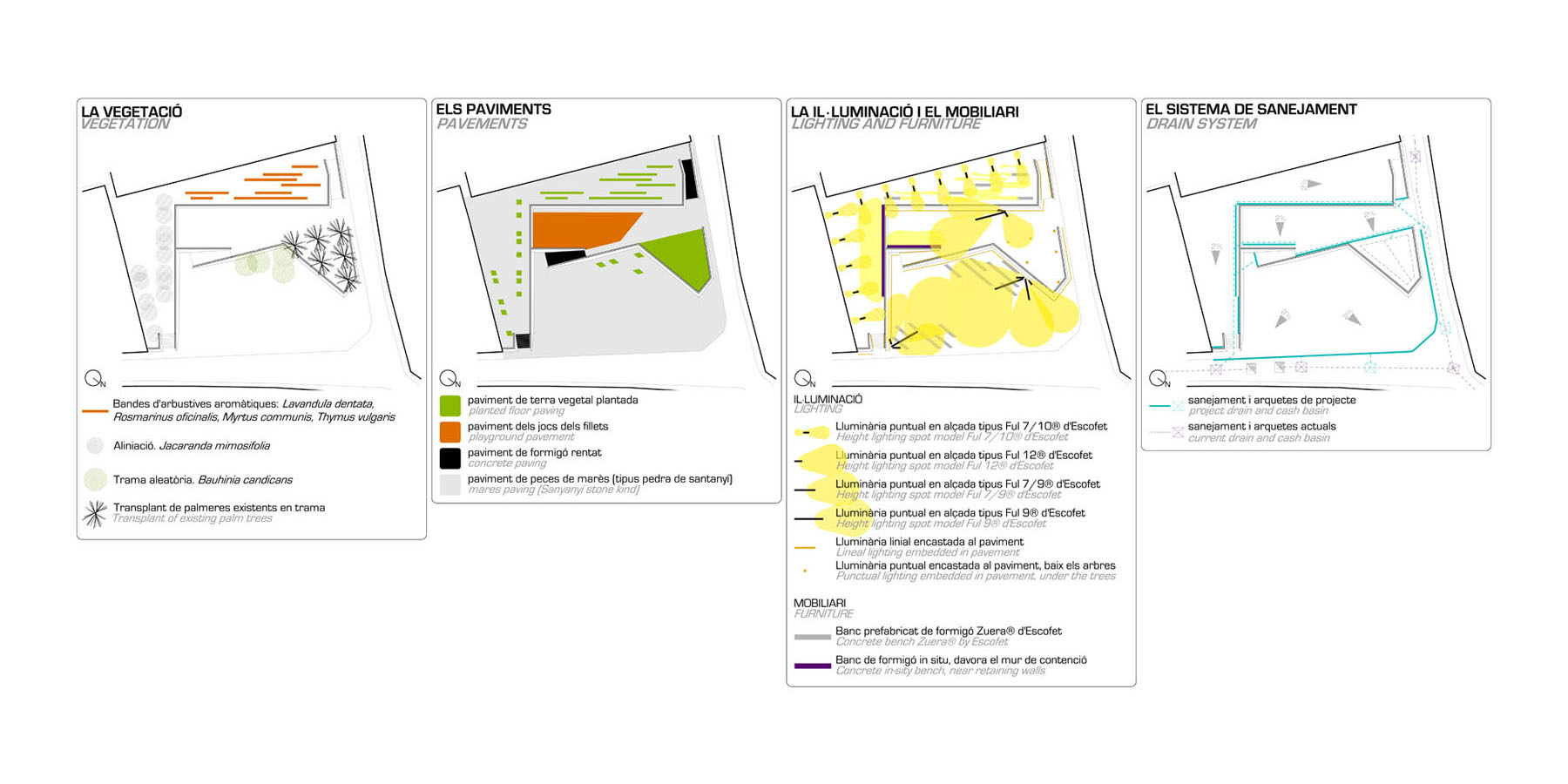 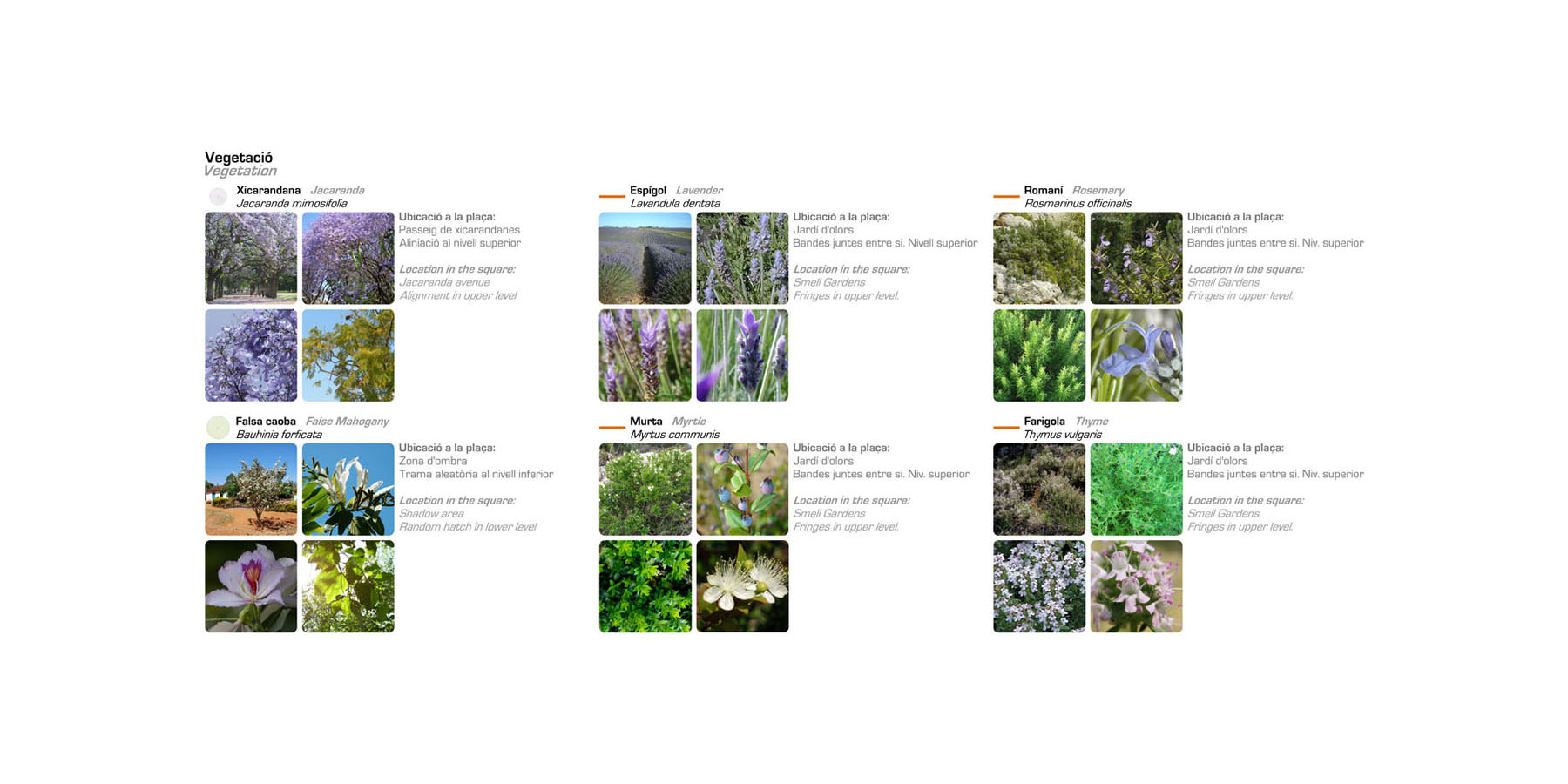 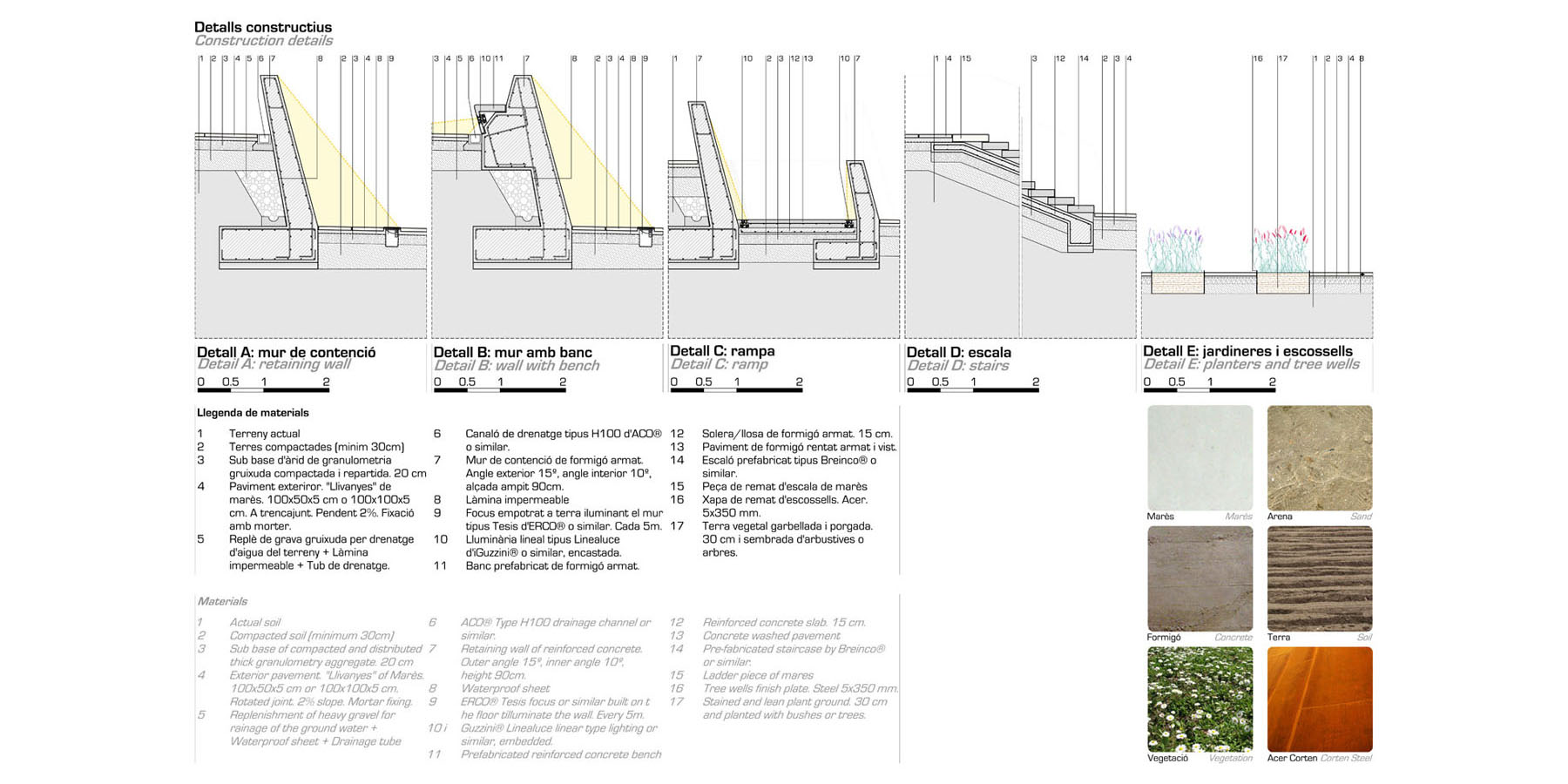 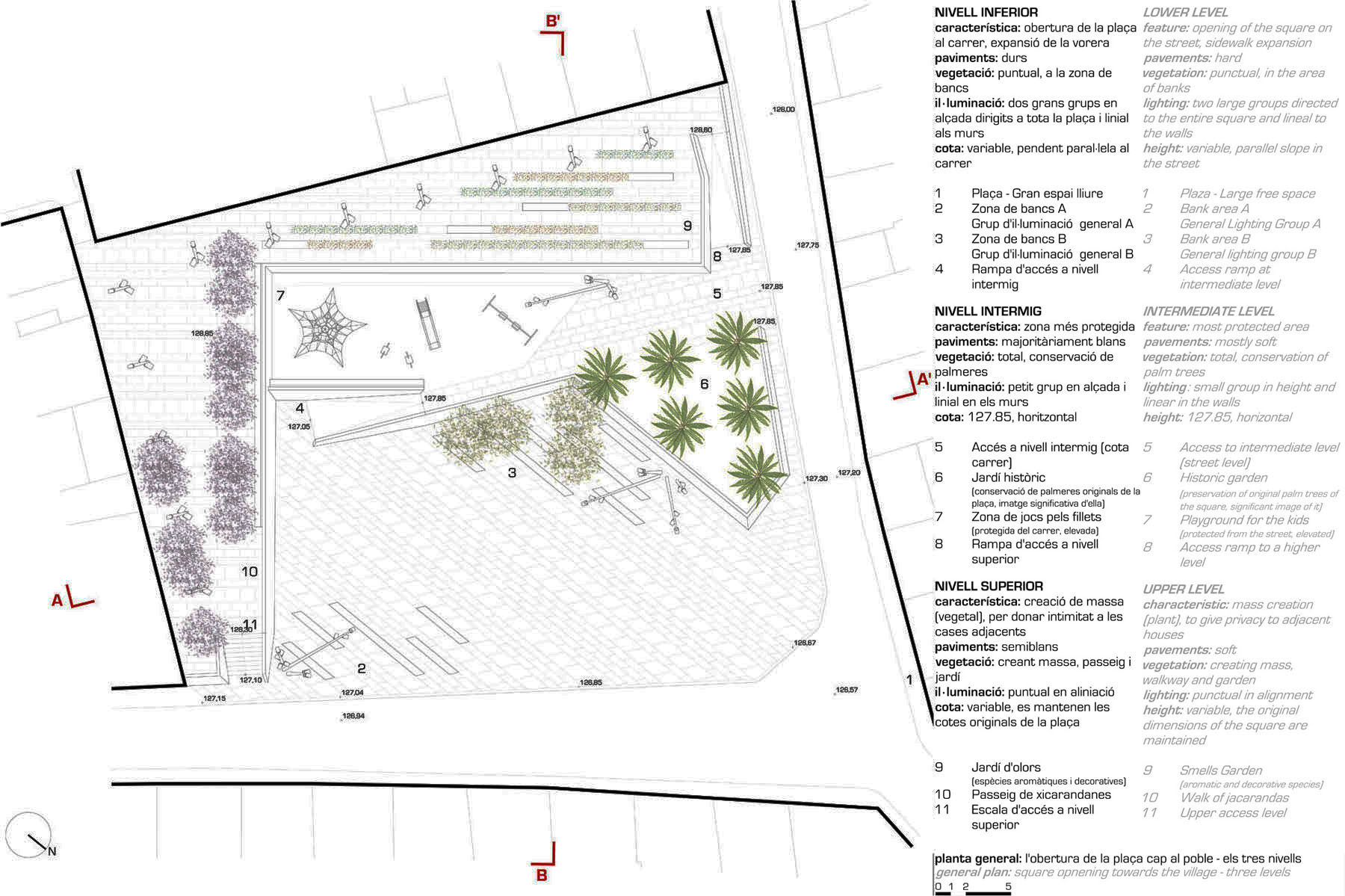 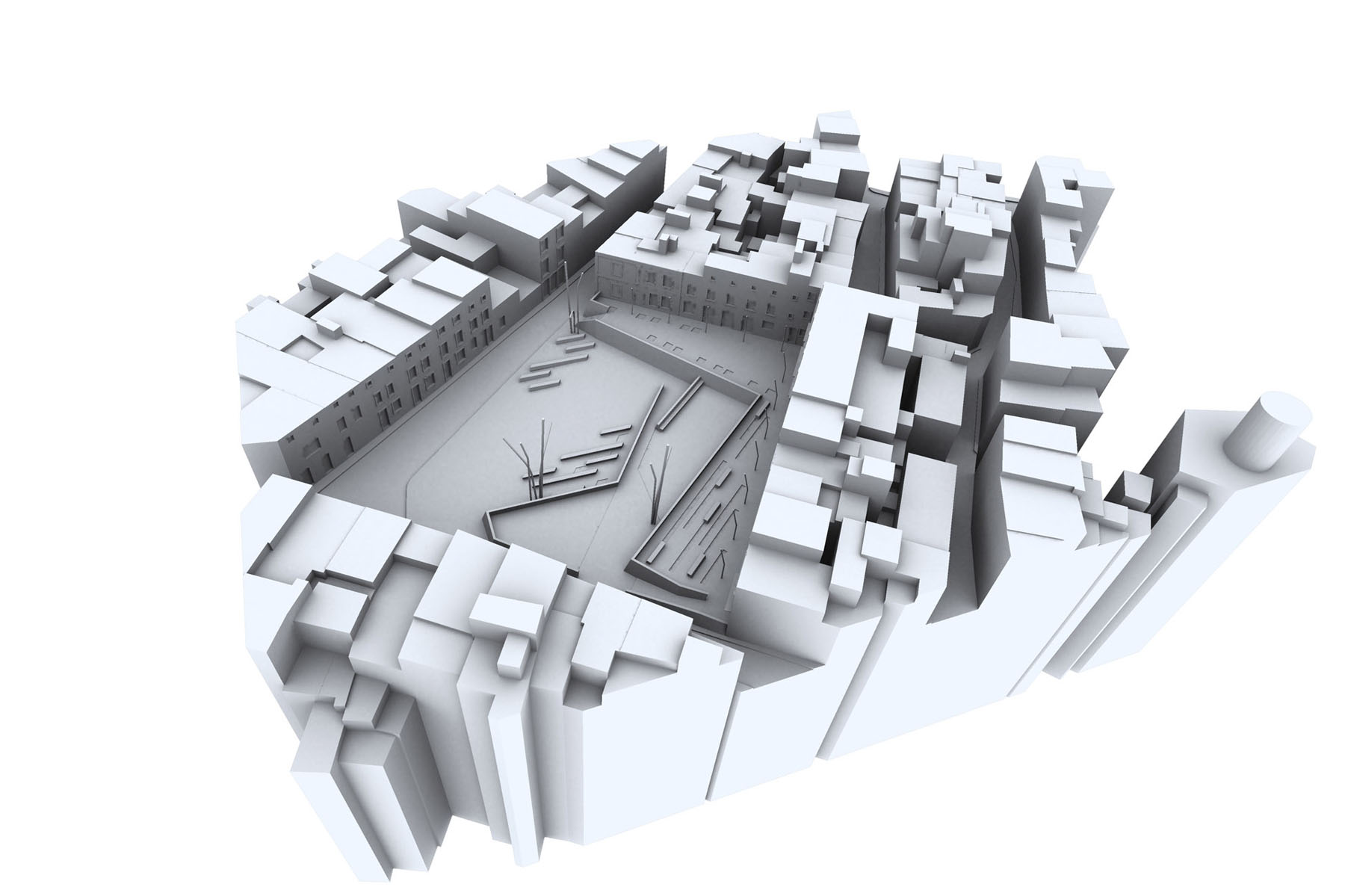 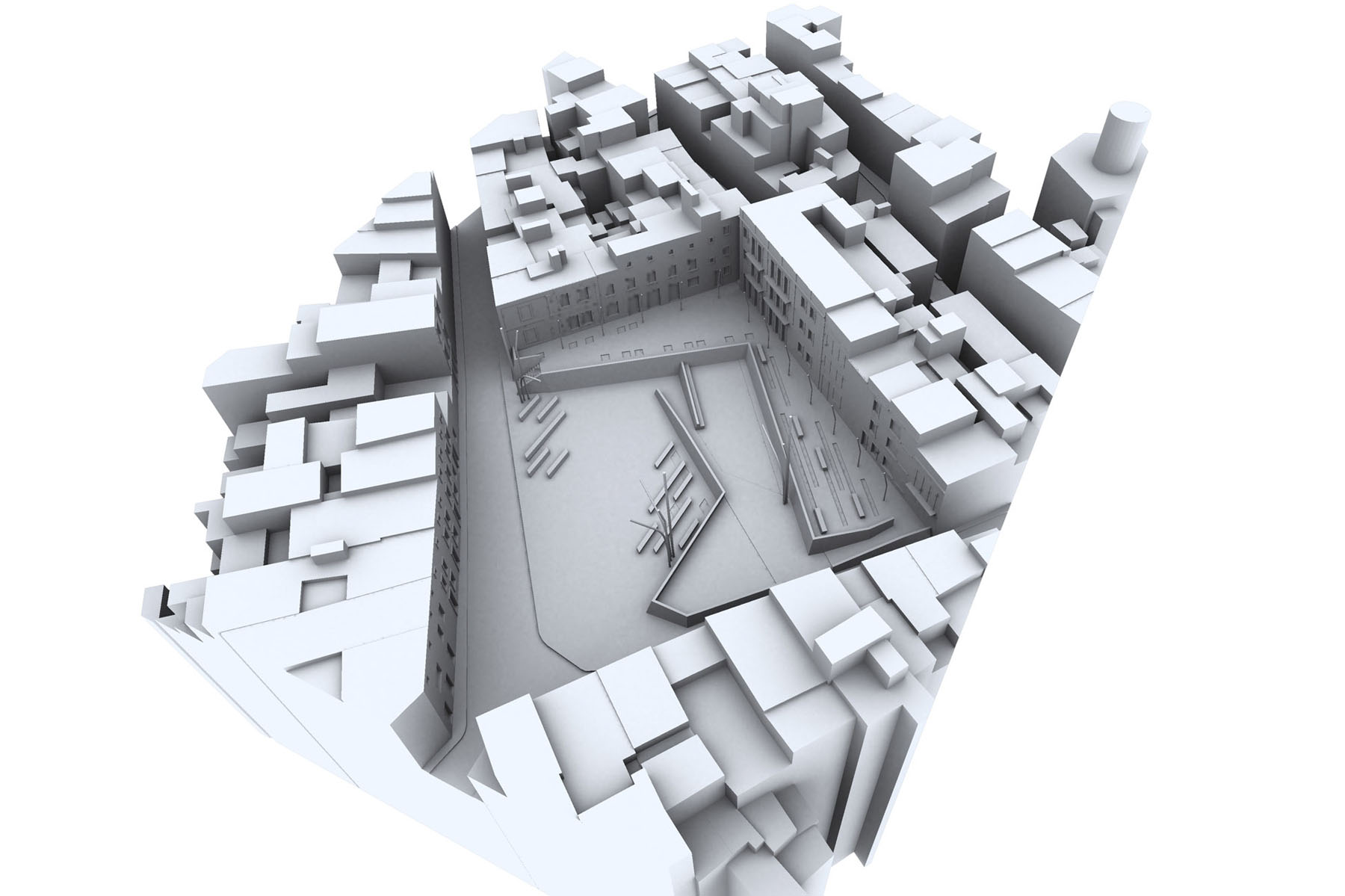 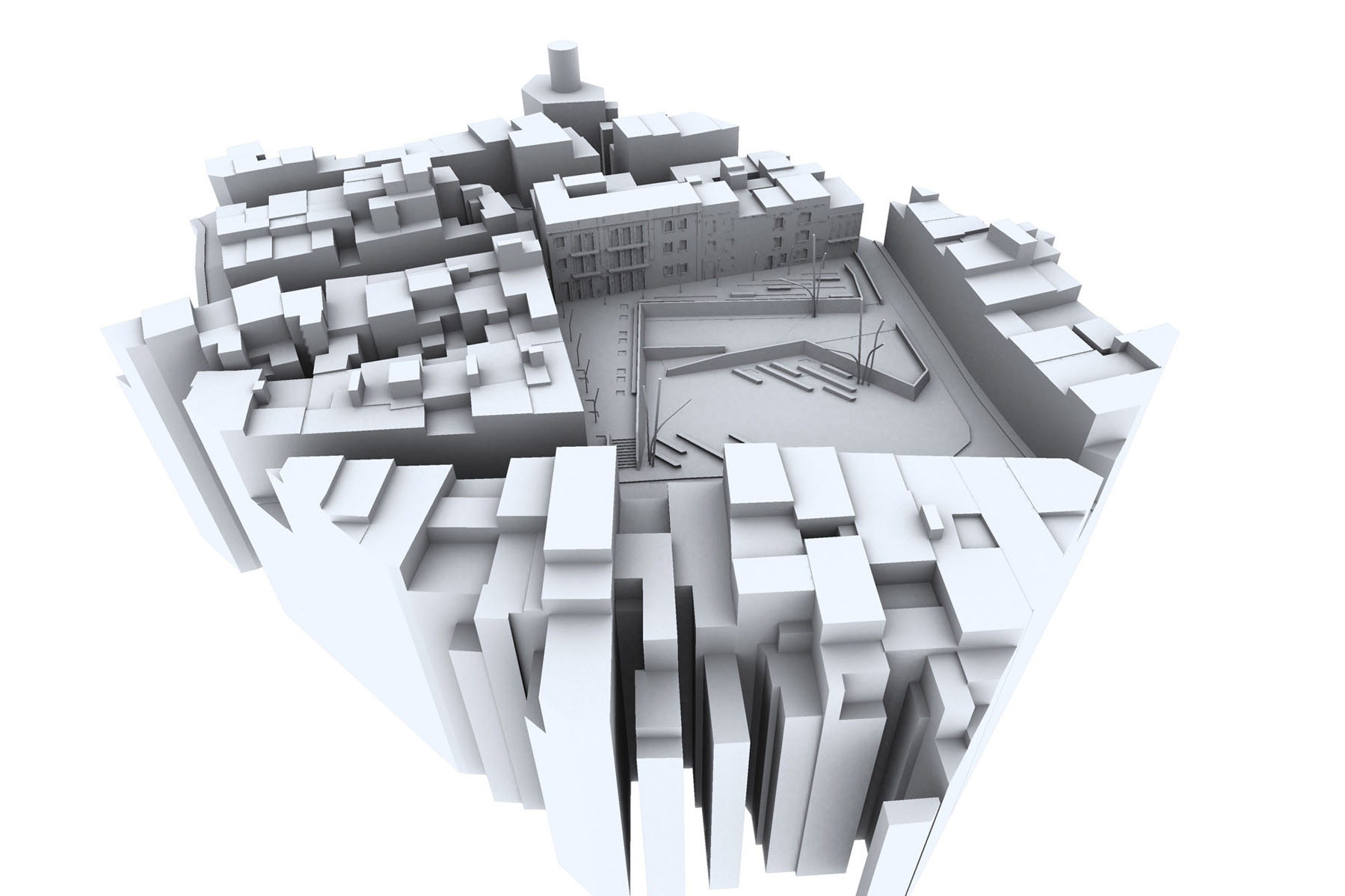 The conversion of space: the three levels
The square is resolved by stepping in three different levels: the level of Carrer de Porrassar Vell, which will be the main space, the level of the current car park and an intermediate level that unites them, allowing the square to be lived in continuity, and generating a union between the two existing levels, which are preserved to allow access to houses (upper level) and the opening of the square at pedestrian level (lower level).

The degradation of uses: from more public to more intimate
The current configuration of the square makes it completely closed in itself. With the opening of the square to the street, it is intended to enhance the public and accessible nature of itself. As the square is increasing in height, the more intimate space and more specific the program. The intermediate level brings together the play area for the children, which is protected and controlled and the historic garden area, where it is sought, recovering the current palm trees, creating a living space and memory. The upper level contains the most quiet uses which are defined by the vegetation; there is a walk of jacarandas and a garden of smells. In addition, a perimeter of access to housing is defined visually, giving it its own character and integration into the square.

The colors and smells: the vegetation
As an initial premise, we want to give its own character to the square, taking care of the current image. The conservation of the existing units of fairs forming a unitary set is planned. The reduced dimensions of the square have led to the idea of forming groups of a single species or type, which generate specific areas. The species that make up the square are chosen taking into account the climate area of Menorca. The shaded areas are formed with groups of jacarandas or bauhínies. The garden of smells, with aromatic shrubs (rosemary, thyme, mum and lavender).

Touch and solemnity: the materials
The whole square is projected with two unique materials as a reflection of the constructions of the square: the containment walls are made of concrete and the pavements, of marès. The counterpoint is achieved with the use of corten steel lighting elements.

The day and the night: the lighting
Light, lighting and lighting elements are considered as project tools. The whole square is defined with continuous illumination against the walls and with specific elements, with great aesthetic force, characterizing the spaces. The large-scale luminaires serve to free obstacles in large spaces, and expressed themselves with a great formal presence; Small-scale luminaires serve to delimit the access area to the houses in the square.