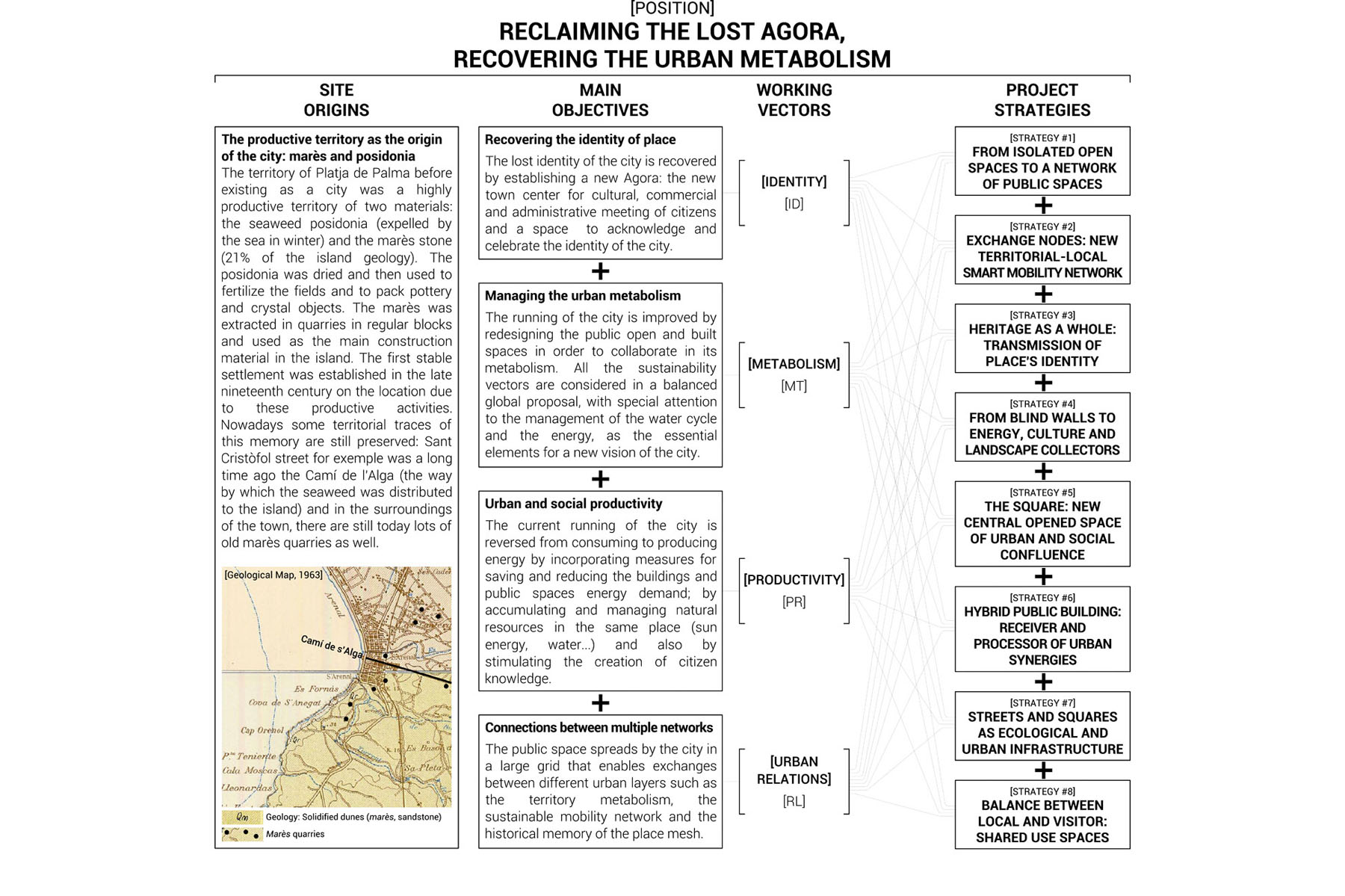 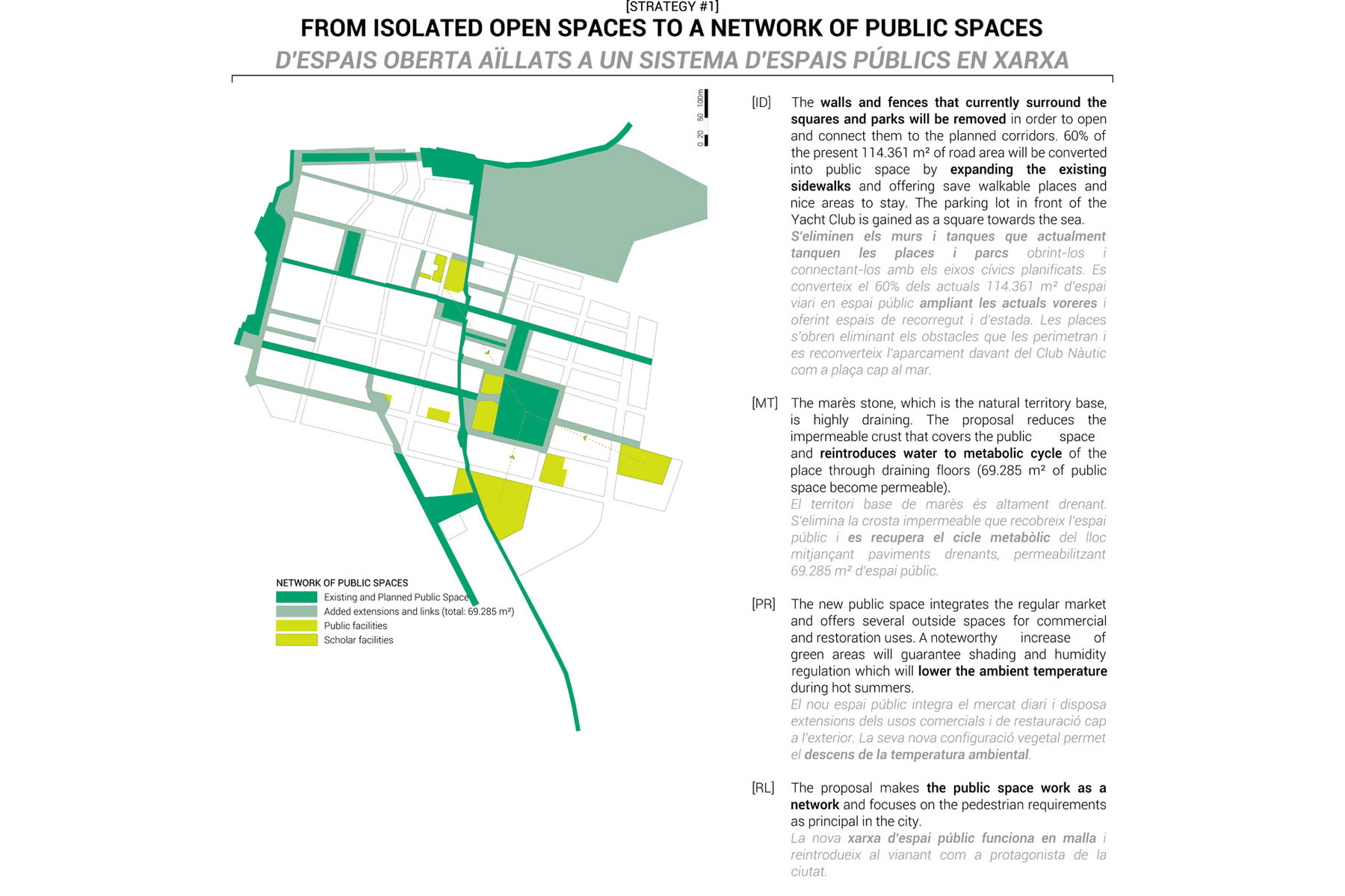 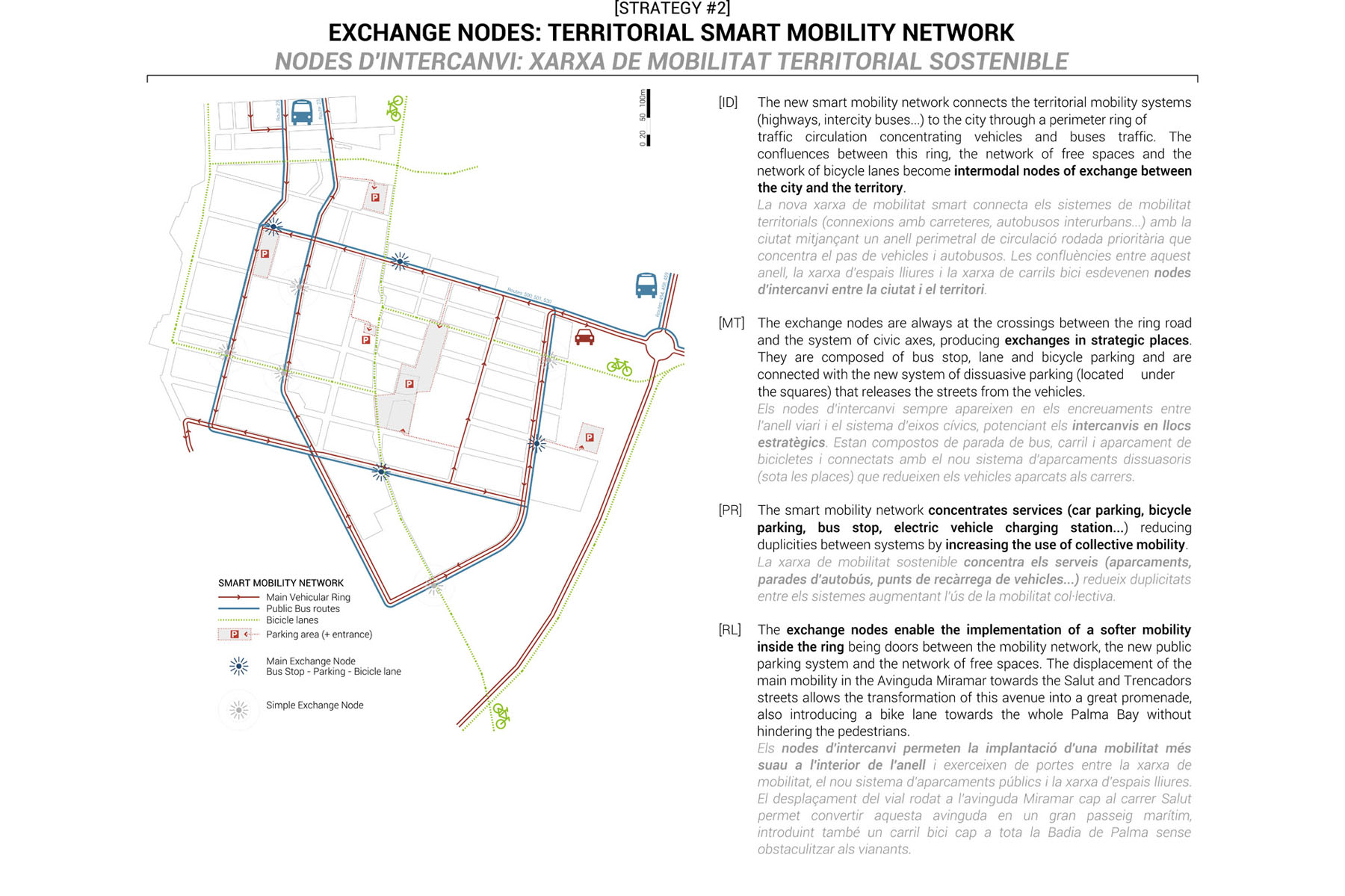 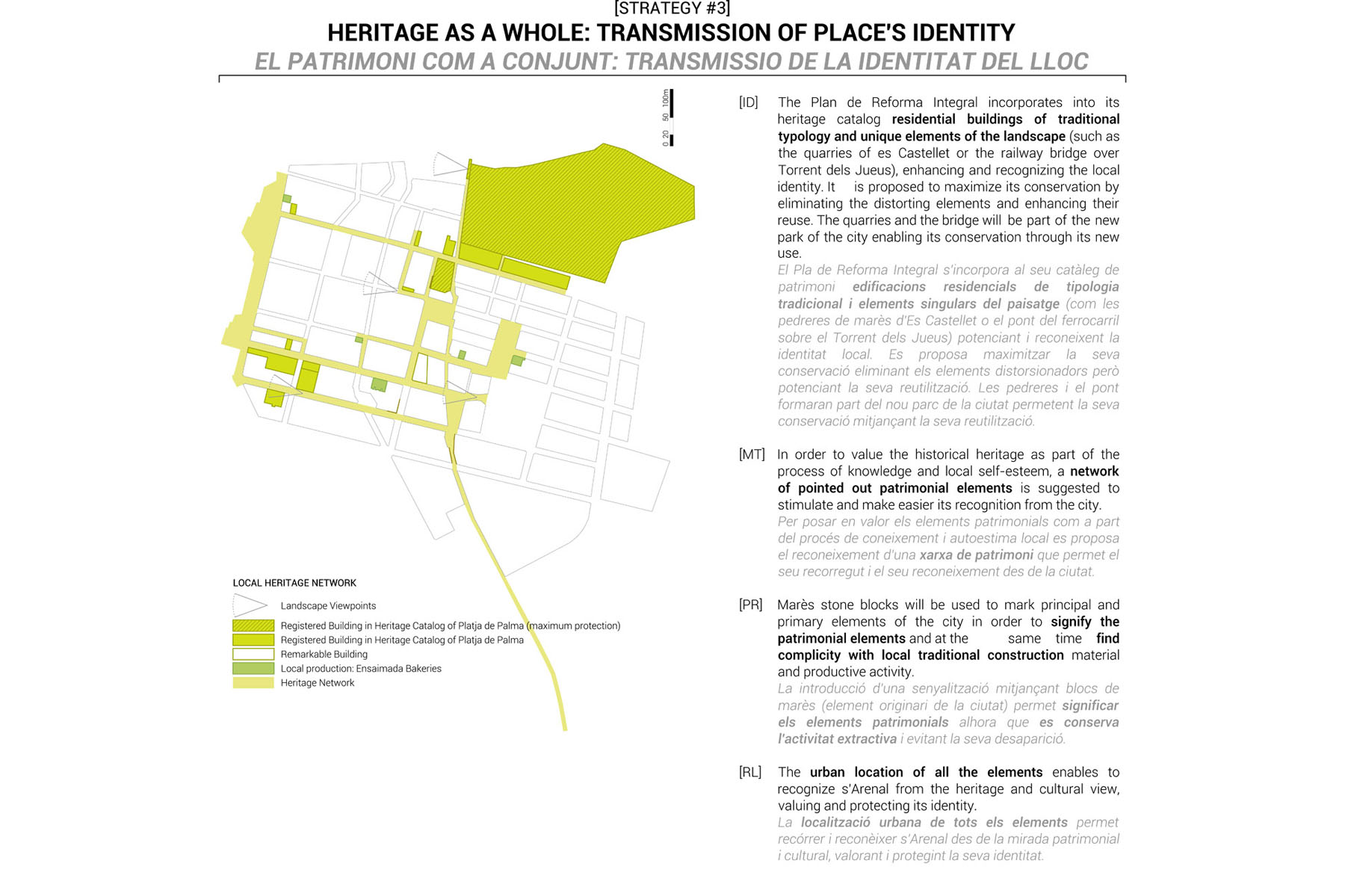 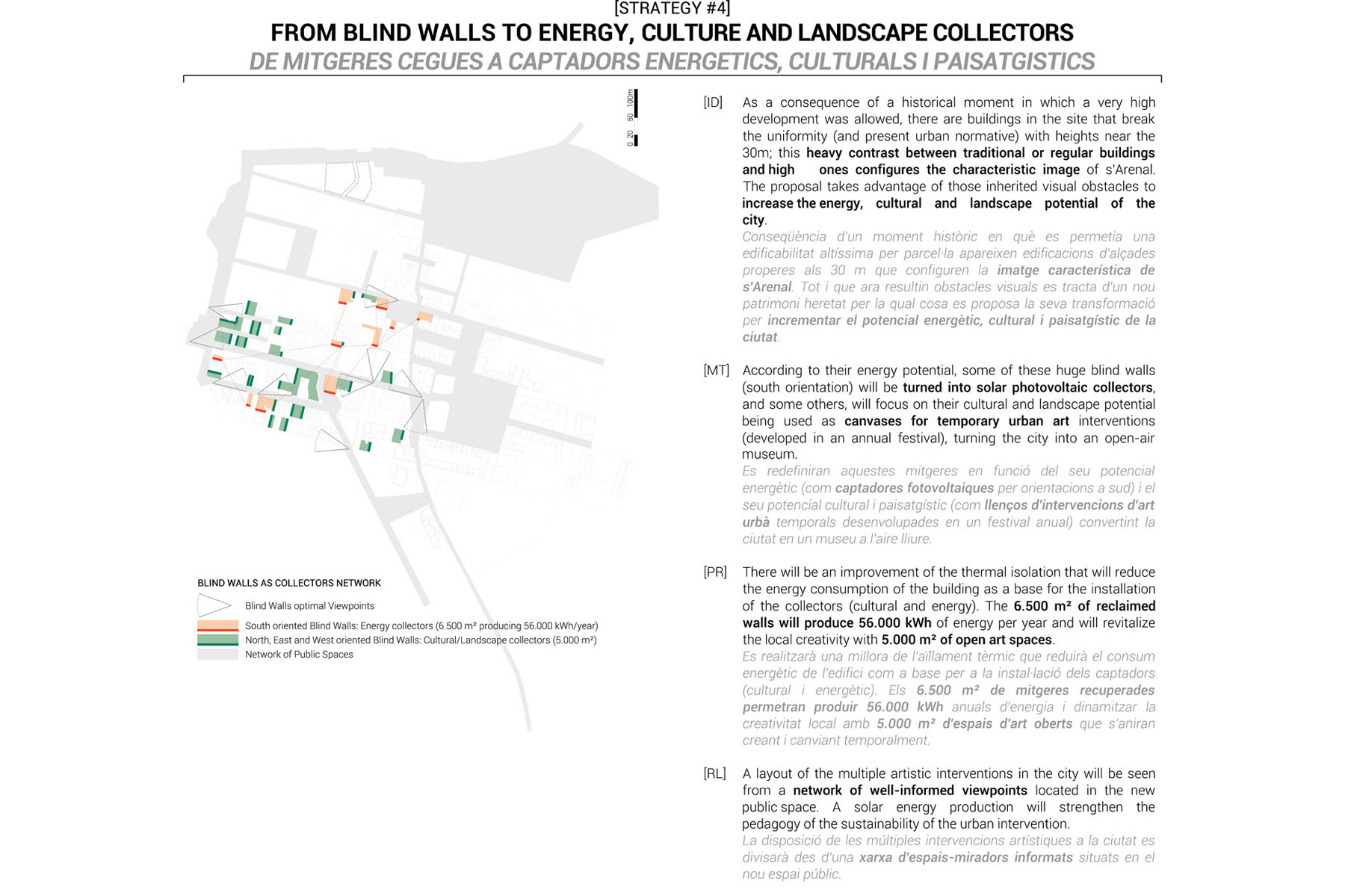 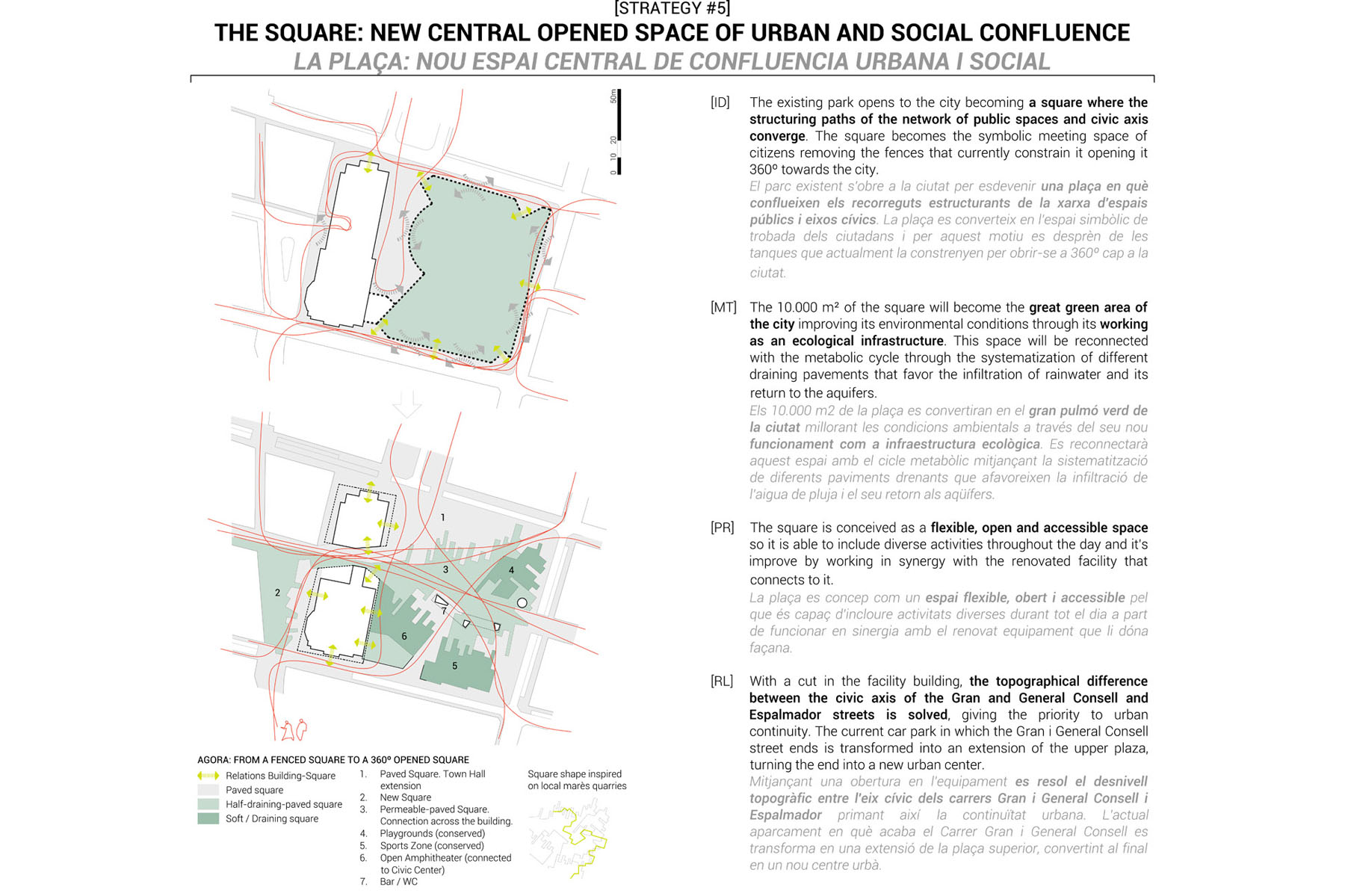 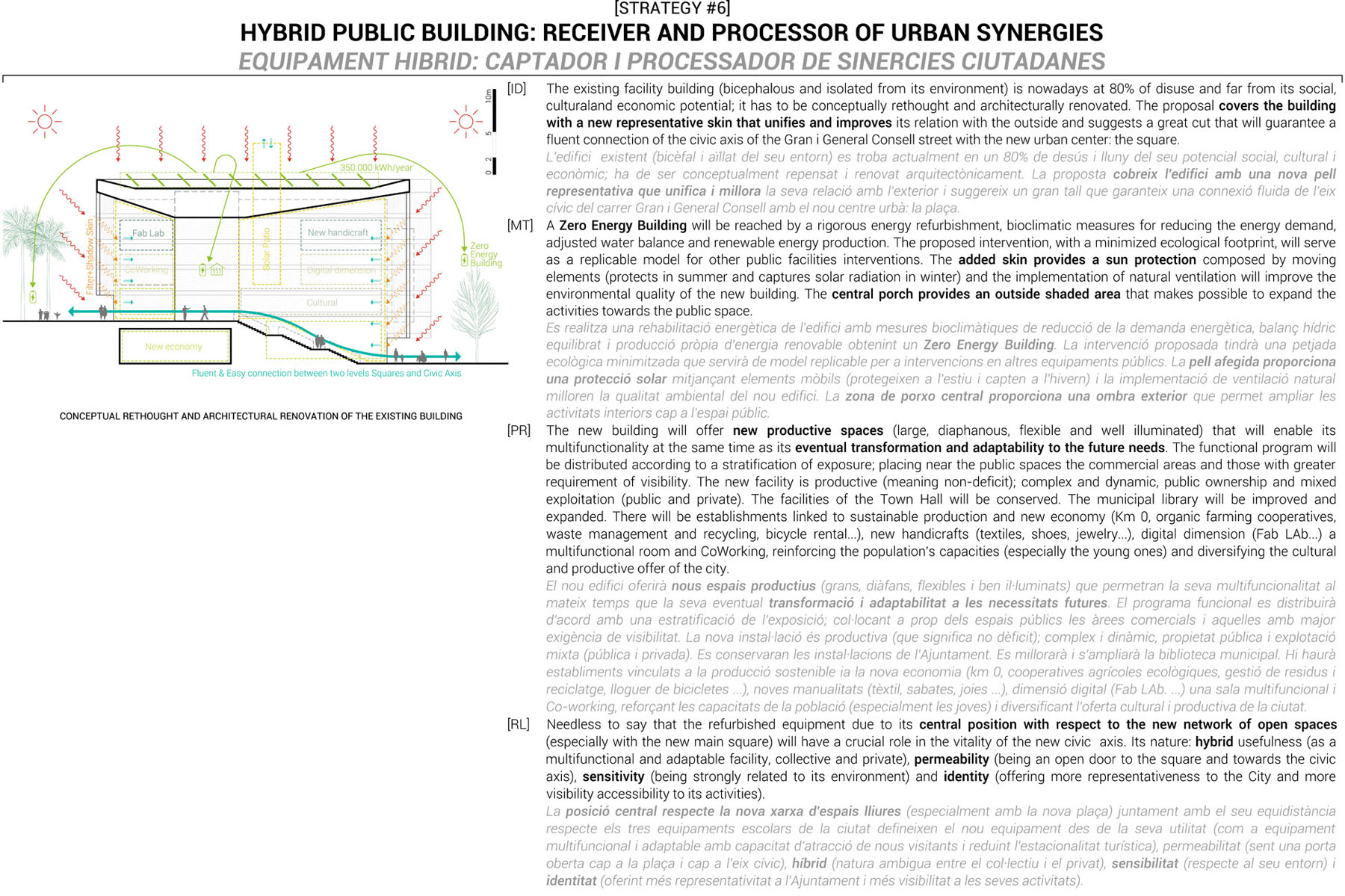 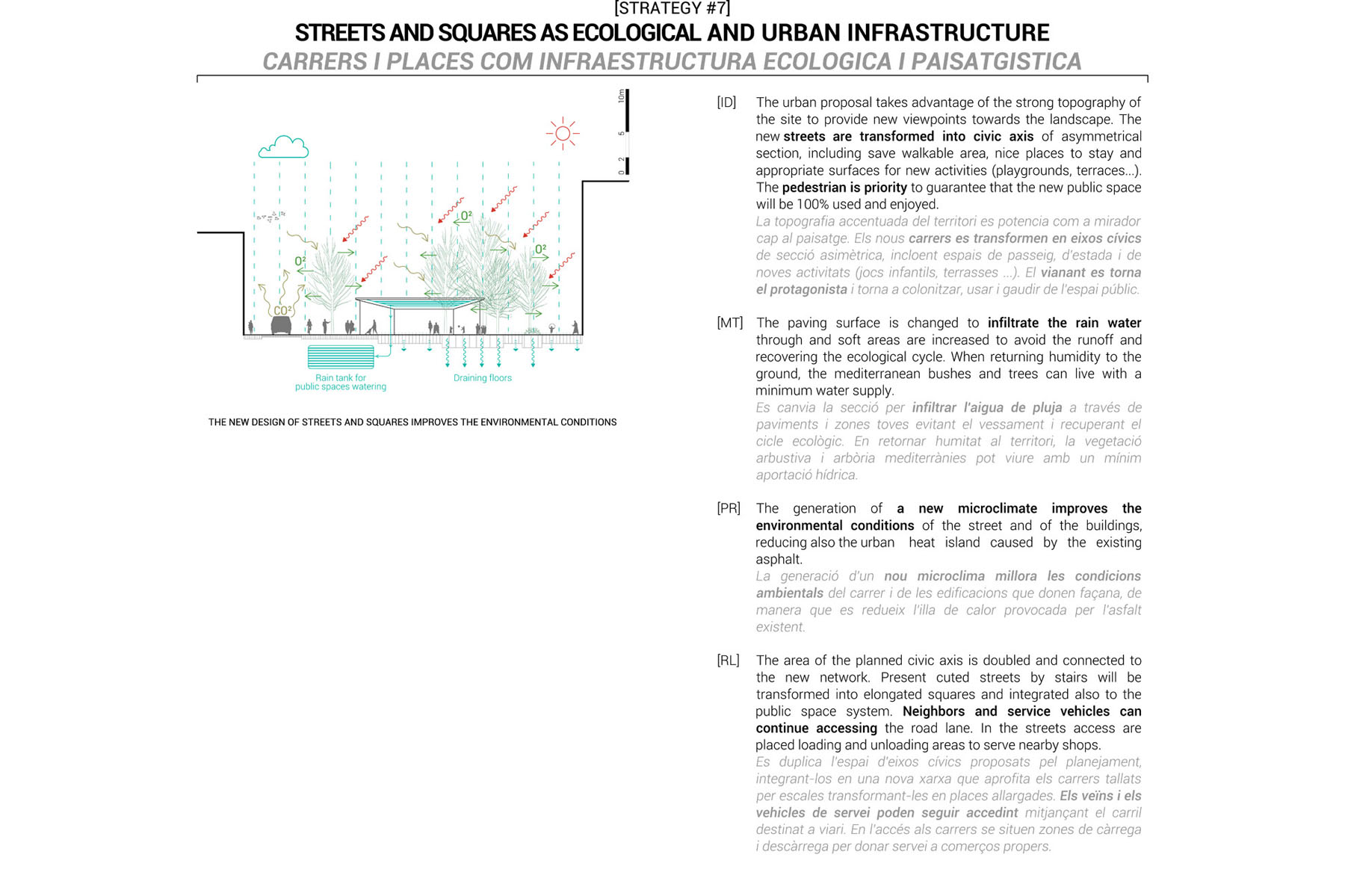 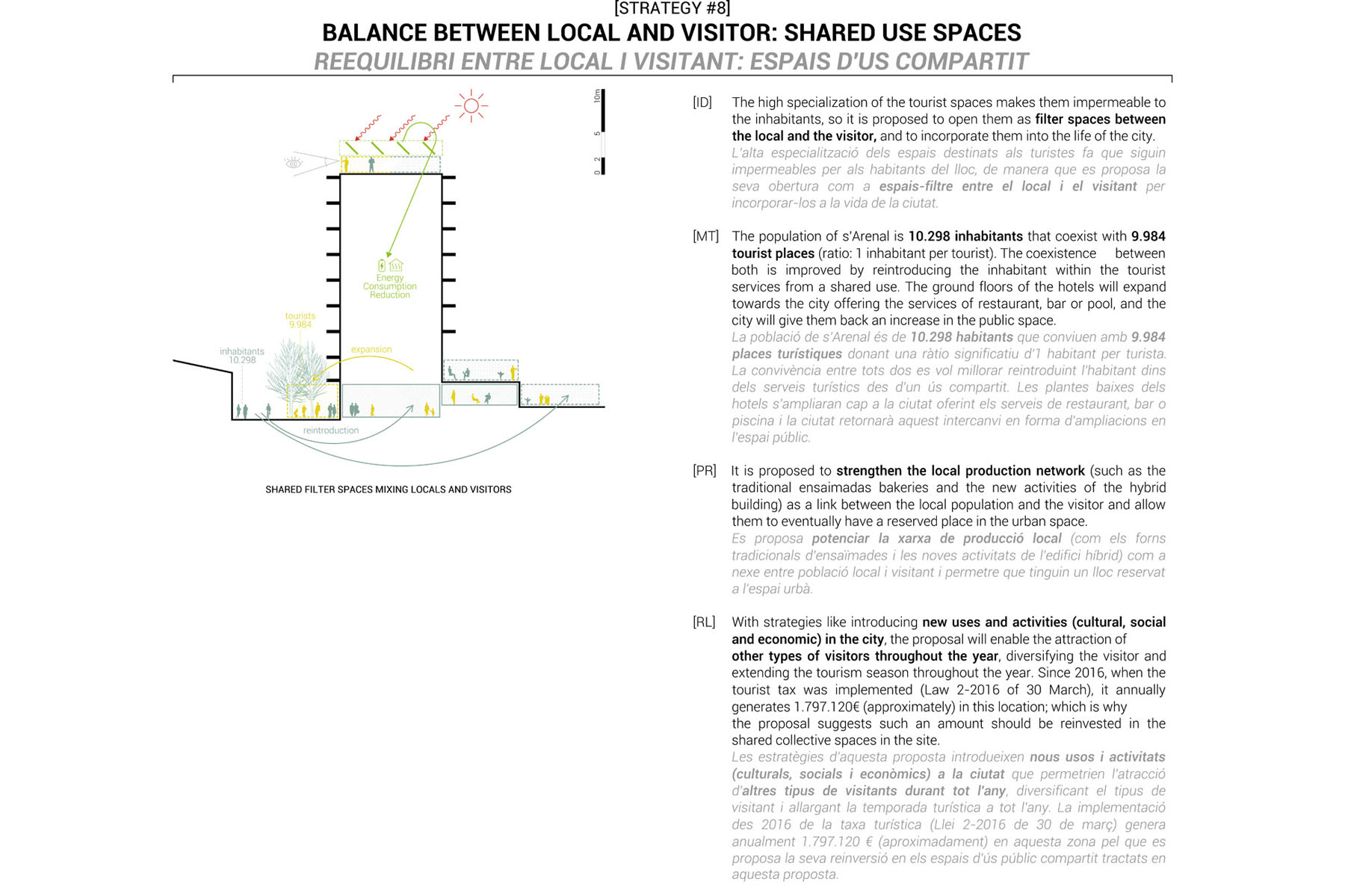 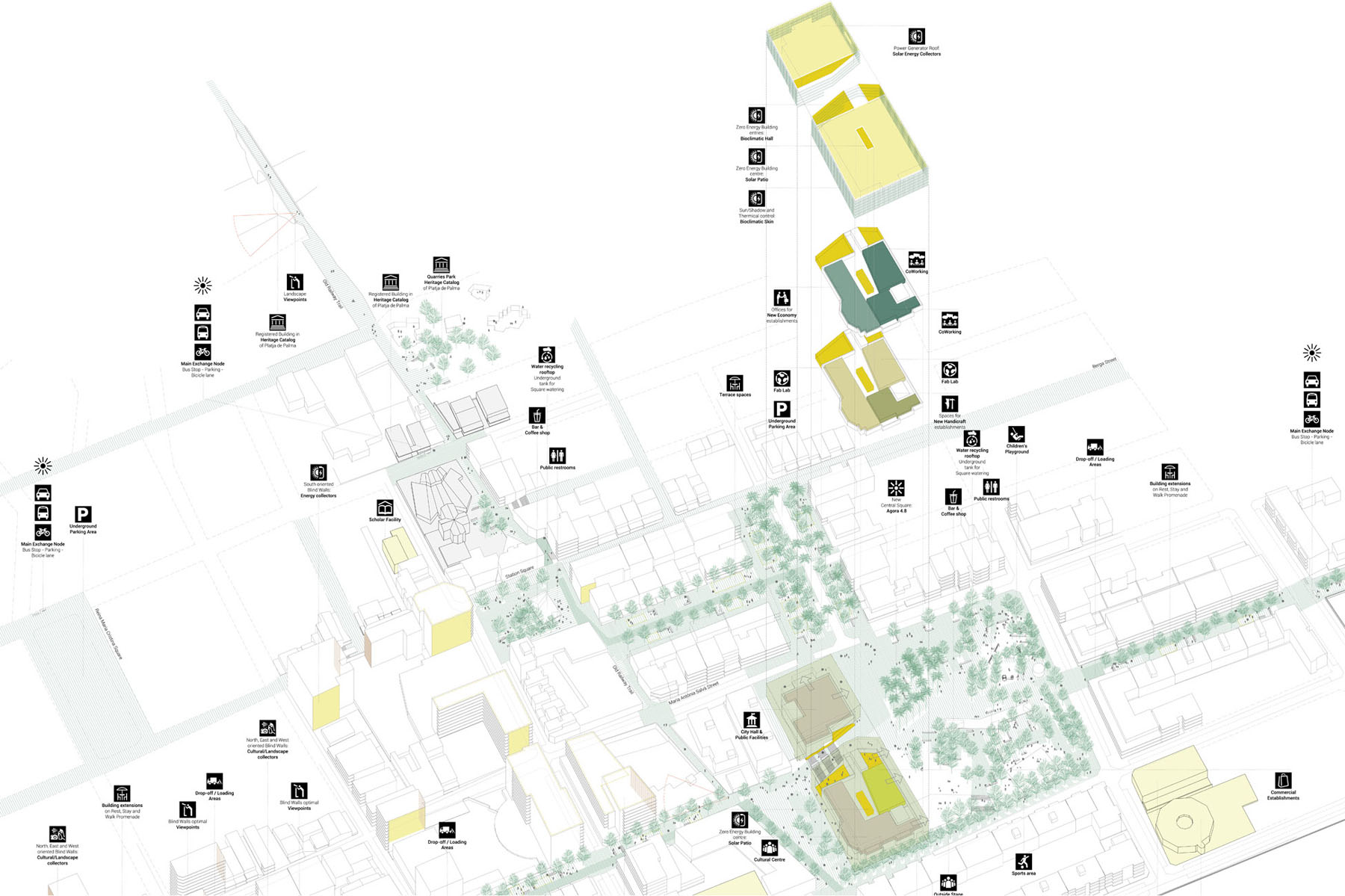 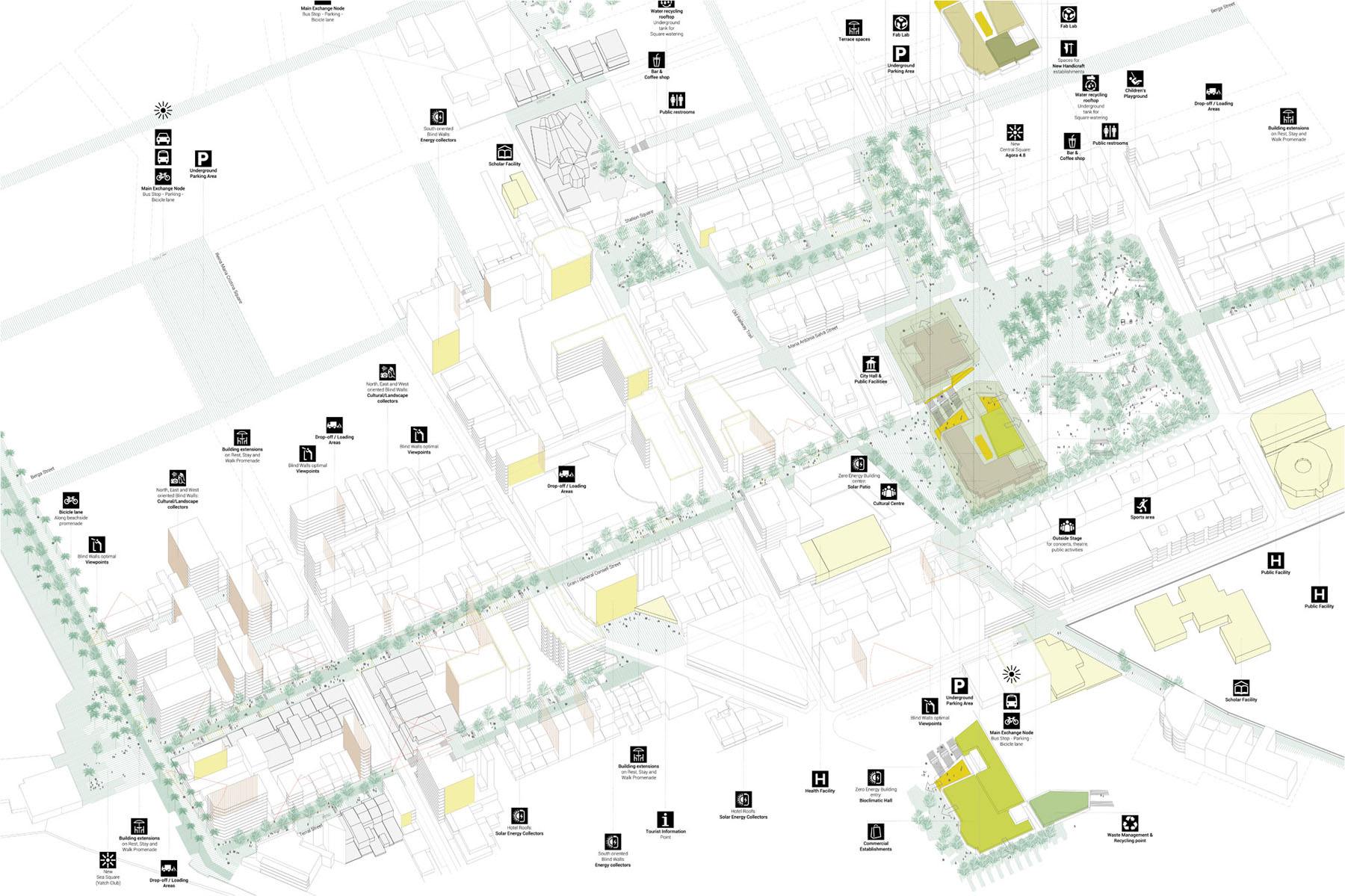 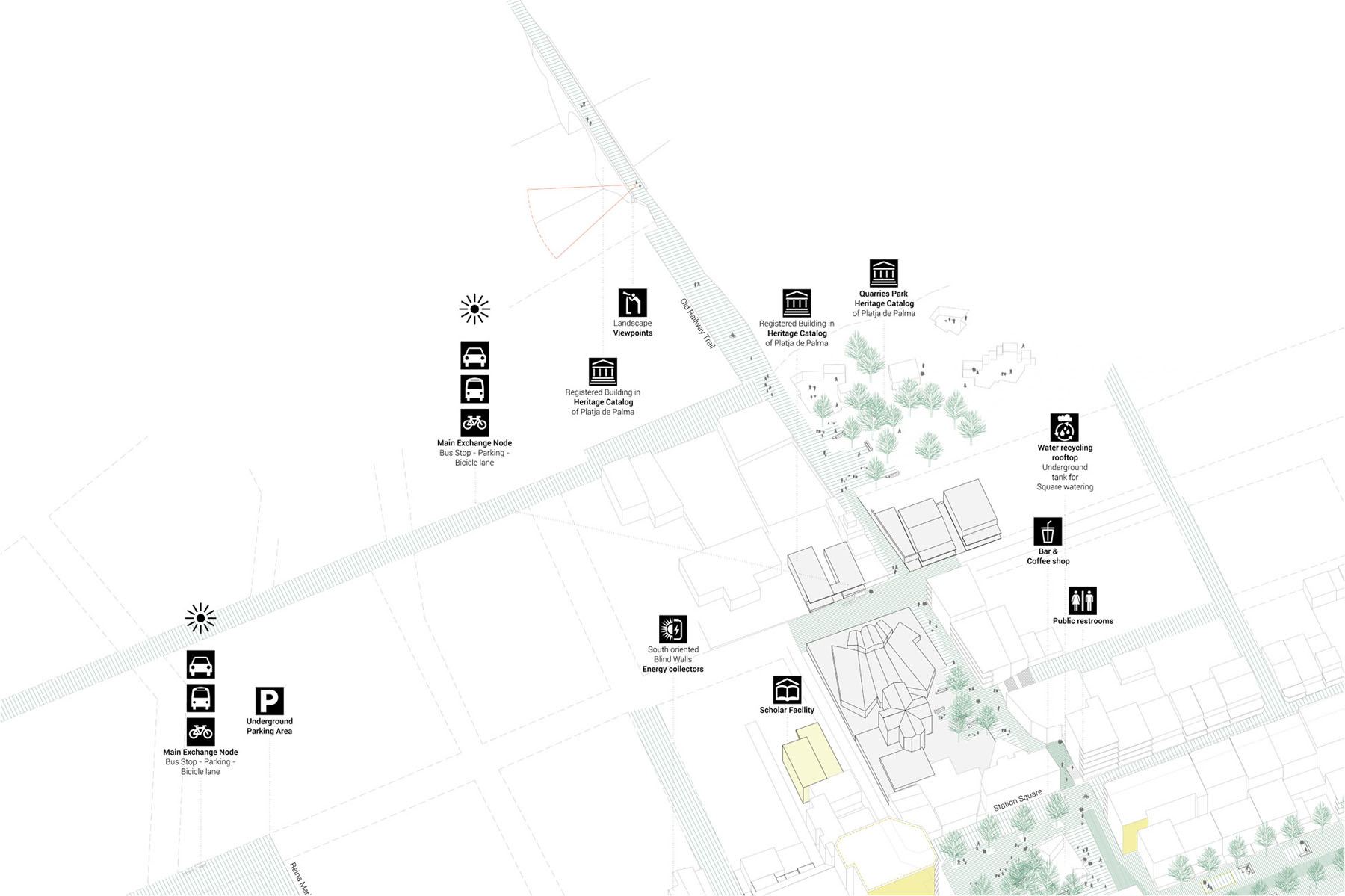 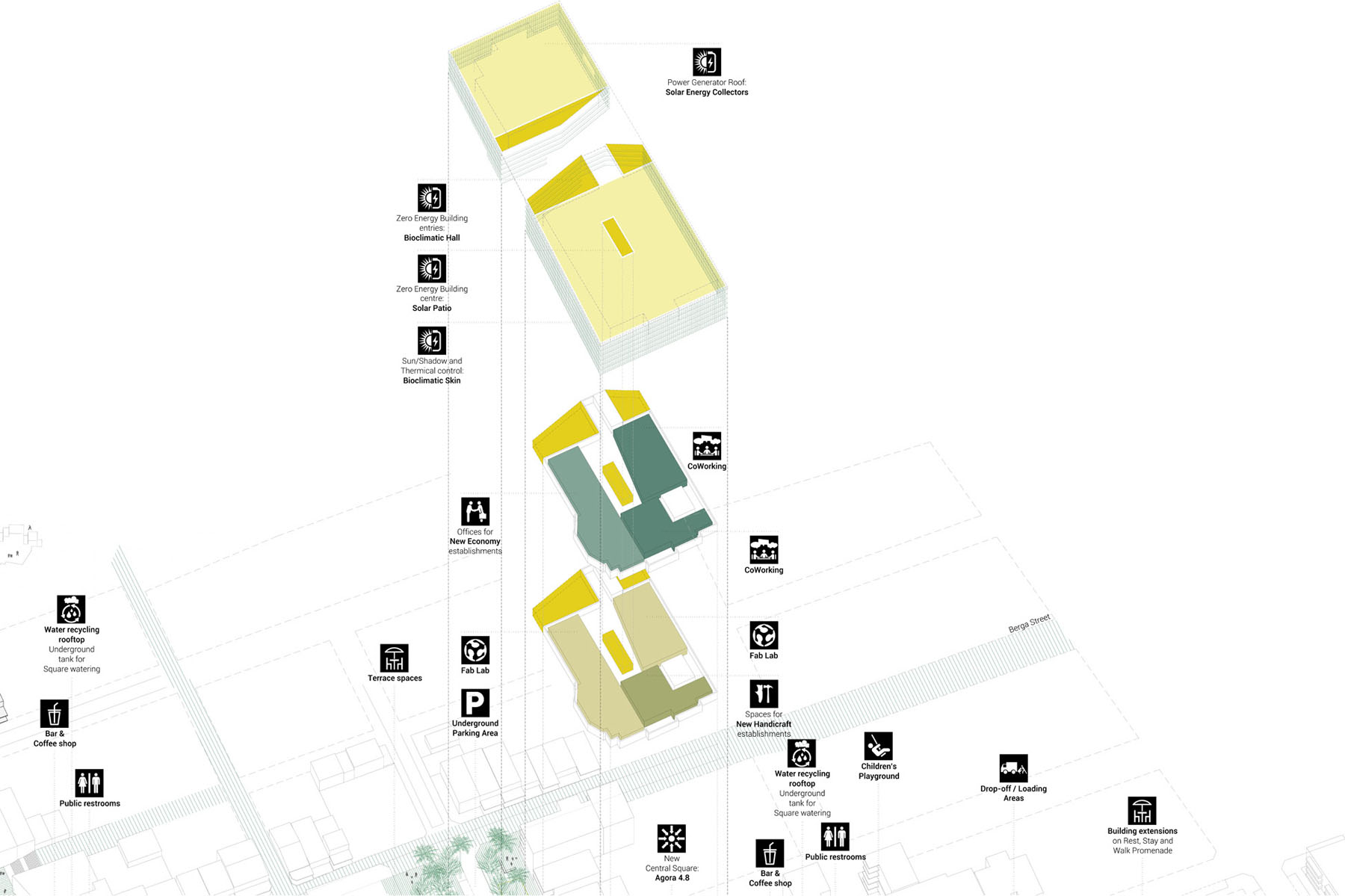 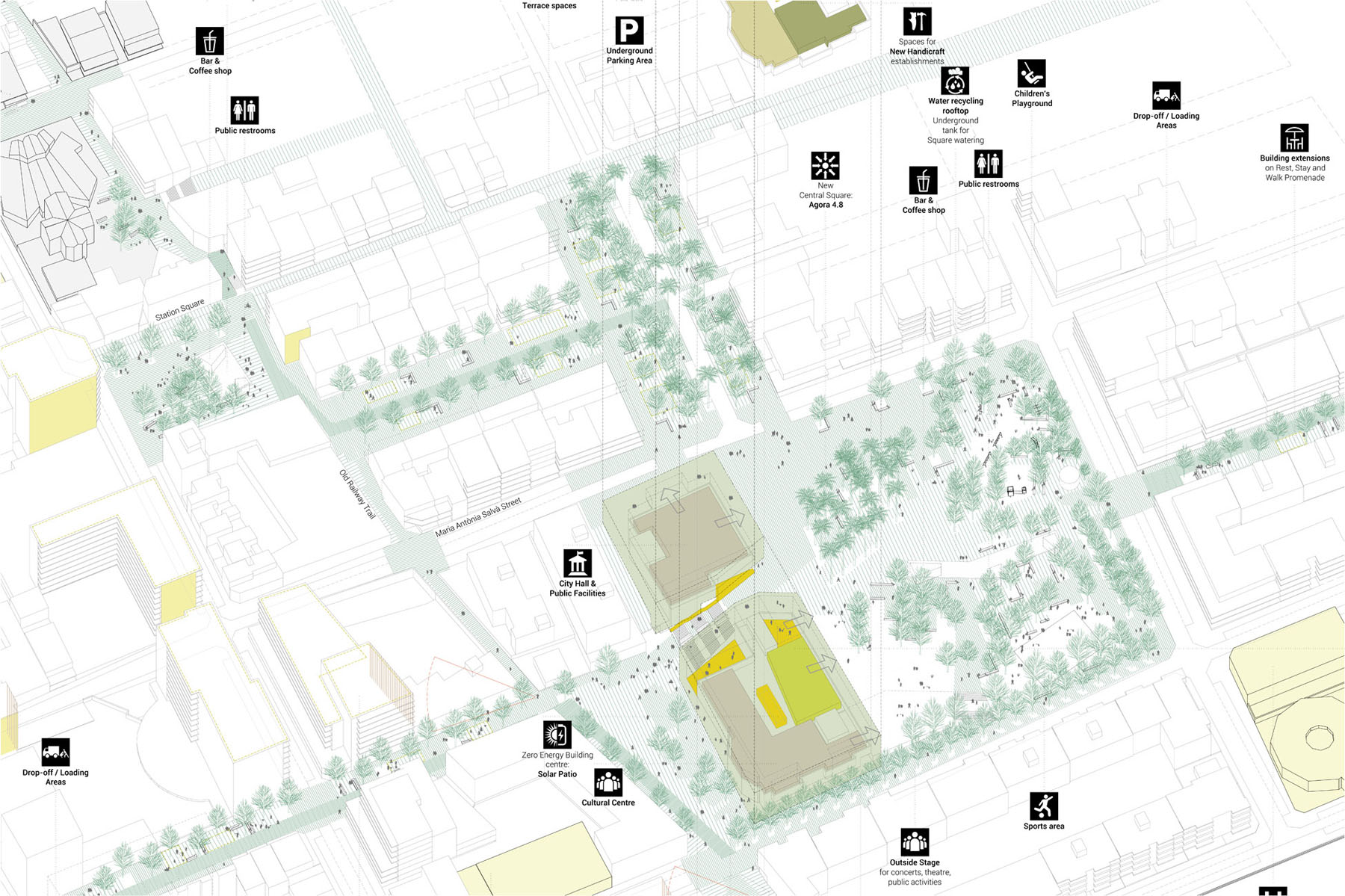 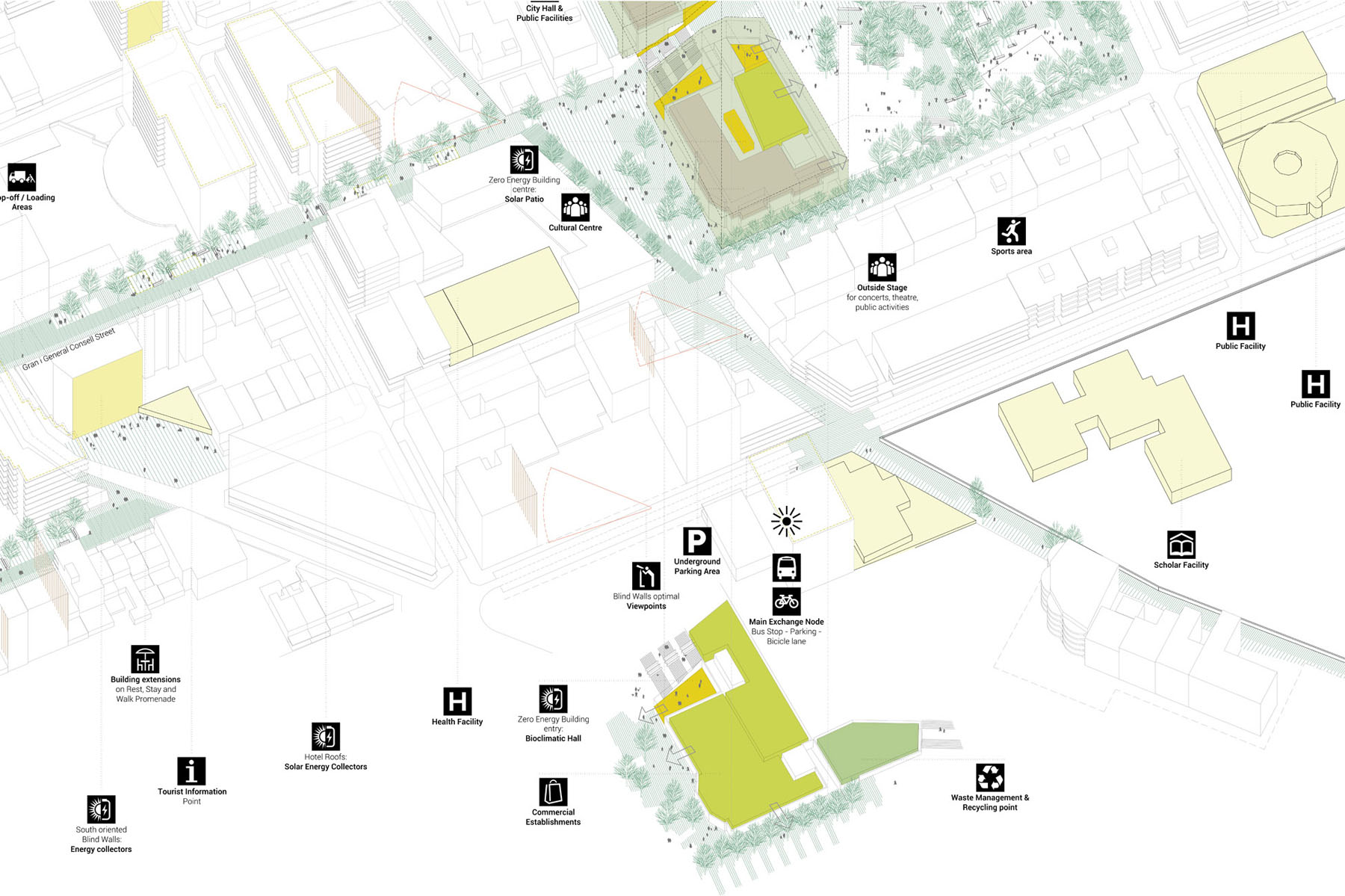 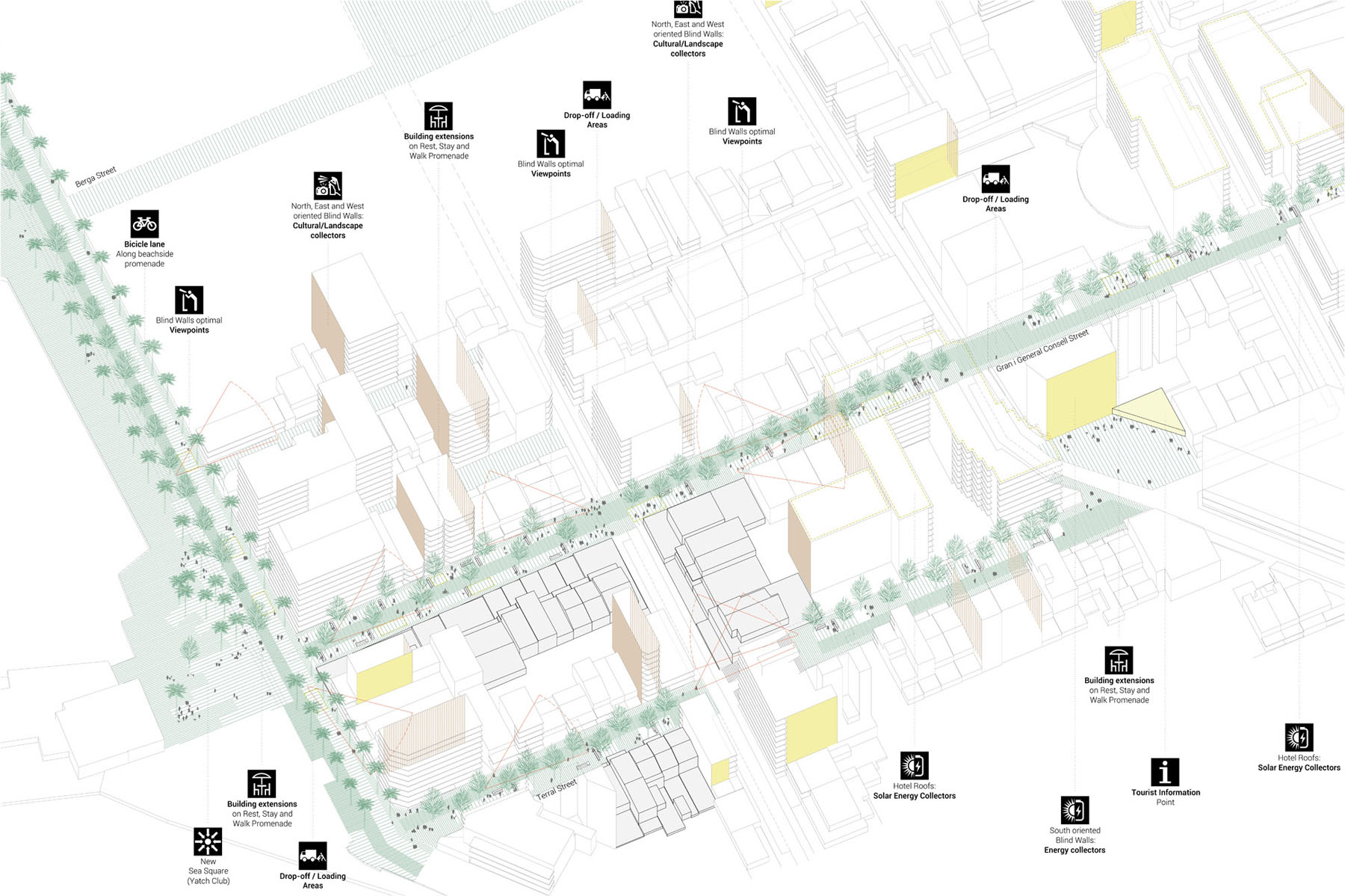 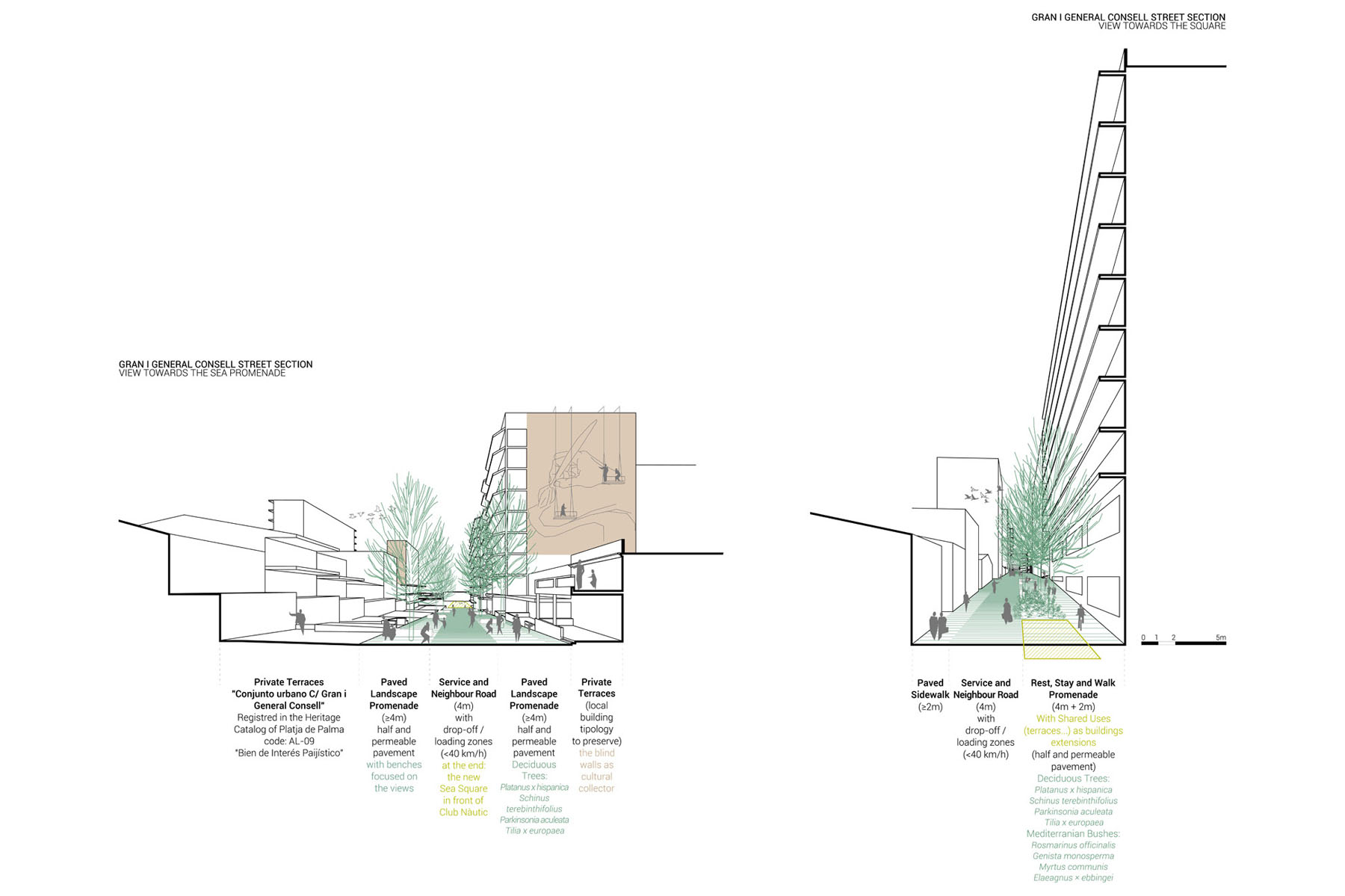 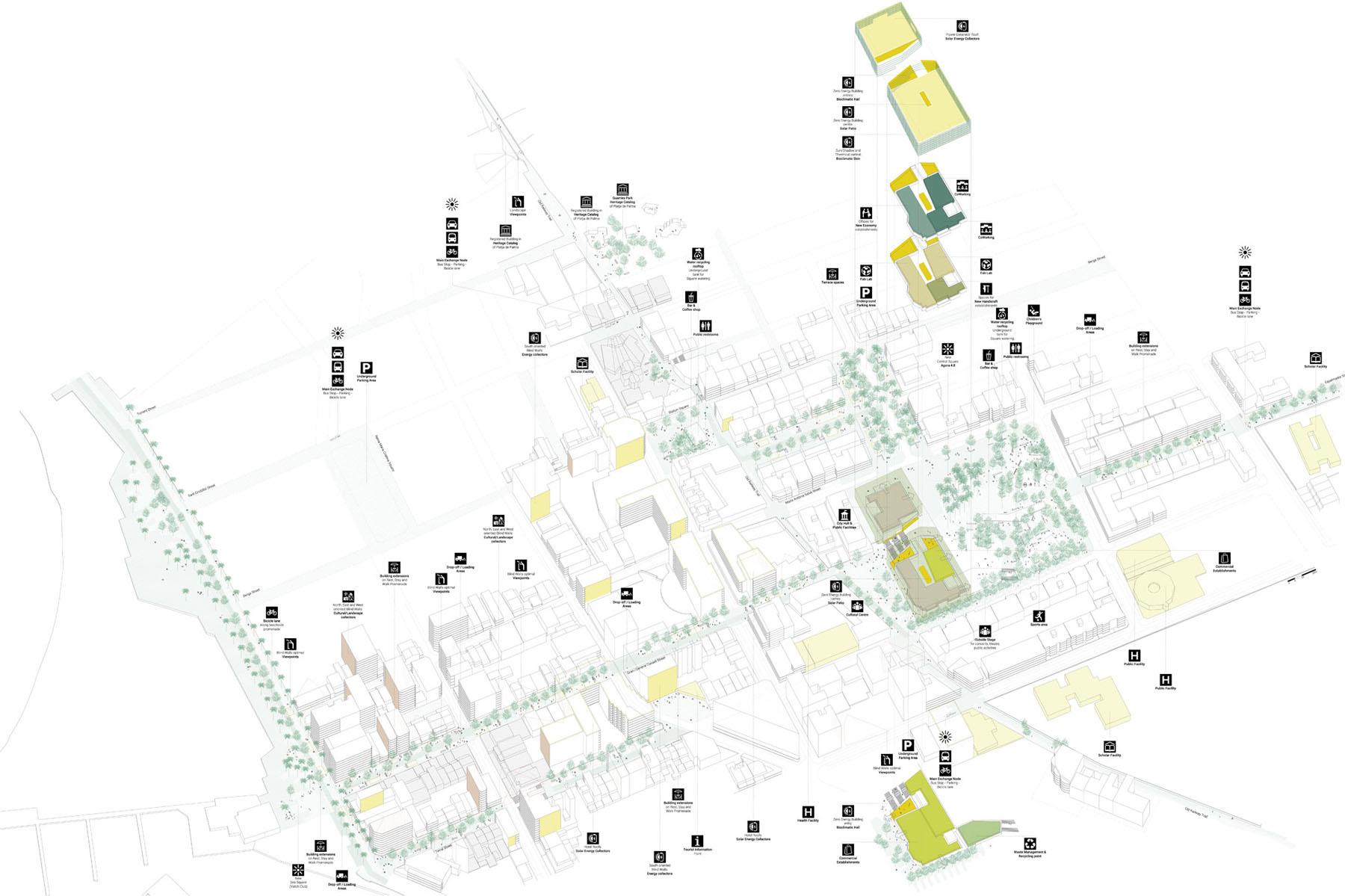 [ IDENTITY ] Recovering the identity of place
The lost identity of s’Arenal is recovered by establishing a new Agora: the new town center for cultural, commercial and administrative meeting of citizens and a space to acknowledge and celebrate the identity of the city.

[ METABOLISM ] Managing the urban metabolism
The running of the city is improved by redesigning the public open and built spaces in order to collaborate in its metabolism. All the sustainability vectors are considered in a balanced global proposal, with special attention to the management of the water cycle and the energy, as the essential elements for a new vision of the city.

[ PRODUCTIVITY ] Urban and social productivity
The current running of the city is reversed from consuming to producing energy by incorporating measures for saving and reducing the buildings and public spaces energy demand; by accumulating and managing natural resources in the same place (sun energy, water…) and also by stimulating the creation of citizen knowledge.

[ URBAN RELATIONS ] Connections between multiple networks
The public space spreads by the city in a large grid that enables exchanges between different urban layers such as the territory metabolism, the sustainable mobility network and the historical memory of the place mesh.

[ #1 ] FROM ISOLATED OPEN SPACES TO A NETWORK OF PUBLIC SPACES
[ #2 ] EXCHANGE NODES: NEW TERRITORIAL-LOCAL SMART MOBILITY NETWORK
[ #3 ] HERITAGE AS A WHOLE: TRANSMISSION OF PLACE’S IDENTITY
[ #4 ] FROM BLIND WALLS TO ENERGY, CULTURE AND LANDSCAPE COLLECTORS
[ #5 ] THE SQUARE: NEW CENTRAL OPENED SPACE OF URBAN AND SOCIAL CONFLUENCE
[ #6 ] THE HYBRID PUBLIC BUILDING: RECEIVER AND PROCESSOR OF URBAN AND SOCIAL SYNERGIES
[ #7 ] STREETS AND SQUARES AS ECOLOGICAL AND LANDSCAPE INFRASTRUCTURE
[ #8 ] BALANCE BETWEEN LOCAL AND VISITOR: SHARED USE SPACES

The improving of the planned civic axis joining them with other civic streets and squares makes a new network of public spaces, working as a ecologic and landscape infrastructure. We propose a new smart mobility network that connects the territorial mobility systems (highways, intercity buses…) to the city through a perimeter ring of main traffic circulation. The confluences between this ring, the network of free spaces and the network of bicycle lanes becomes intermodal nodes of exchange between the city and the territory. The new center of the city is composed by the new square and the redesigned public hybrid building, working together for the first time. The square becomes the symbolic meeting space for citizens removing the fences that currently constrain it, opening it 360º towards the city and becoming it great green, open flexible and accessible center of s’Arenal. The existing facility building is covered with a new representative and bioclimatic skin that unifies and improves its relation with the outside and a great cut that enables a fluent connection of the civic axis of the Gran i General Consell street with the square is created.